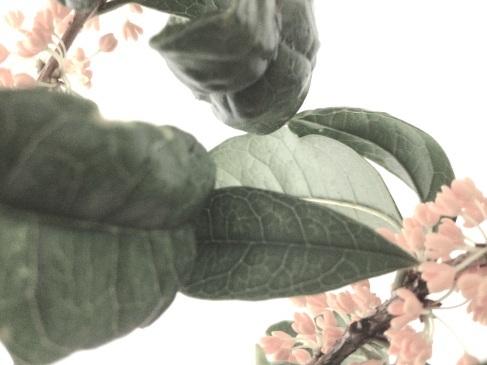 There is something almost irritatingly predictable in the annual punctuality of Japanese osmanthus. I will be walking along, and will suddenly catch its fresh, early, blooming in the air, unexpectedly, ( I always forget ), and then, ask myself the date. Ah yes, October first. Or, perhaps, sometimes, October the second.  Always one of these. But whatever the date, the flowers, like Japanese trains, come out like clockwork, and for the next two weeks you are drowsed, almost suffocated, in that canned-peach, alluringly autumnal smell of apricots, orange peel, and delicate white flowers.

Two years ago, post-earthquake, we moved to this house, which just happens to have the biggest osmanthus tree in the entire neighbourhood. If you are an osmanthus freak, then, this is the time to come and stay chez nous. Hard to imagine, now, how extraordinarily excited Helen and I were, fifteen years ago or so, smelling it here in Japan when she first came to stay, clutching its tiny, beautifully scented florets in our hands and marvelling at its existence; but I suppose when you have anything in such huge abundance, even something of great beauty, it eventually loses some of its lustre: I know the smell of these flowers so completely inside out now that I have something approaching osmanthus nonchalance – I simply can’t escape it. 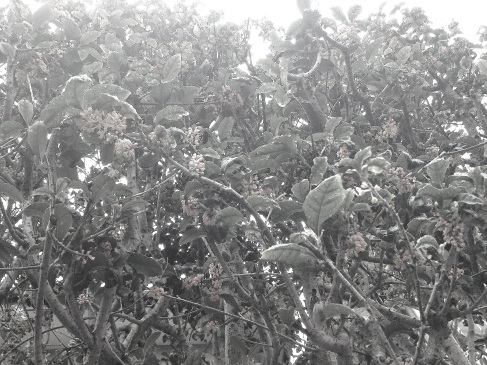 – the osmanthus tree in the front garden; photos taken today – 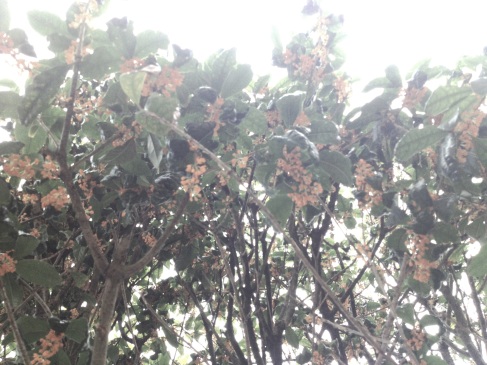 ‘Osmanthus’. The word itself is beautiful, capturing some of the cruciferous clutch of its tightly-bound fleurs, those powerfully scented little blooms that herald autumn here in the East.  It is called ‘kinmokusei‘ in Japanese, and osmanthus is a well loved scent here, used in teas, soft, floral incenses, and in various other scented products such as hand creams, the kind of unobtrusive, yet slyly sensual, perfume the Japanese often love; perfect for autumnal, kimono-clad temple strolls in the koyo, the melancholic contemplation of the turning autumn leaves which is so exquisite later, especially in Kyoto, in November.

In perfume, the osmanthus flower, as a main feature in a fragrance,  has become more prominent in recent years. I remember, after we had discovered that first osmanthus tree and its startling flowers, passing by, then turning immediately back to, the heady apricotiness that rose up beguilingly as we were mounting a hillside by the gaijinbochi, or foreigners’ cemetery in Yamate, we later, Helen and I (coincidentally it seemed), came across Keiko Mecheri’s Osmanthus for the first time at Barney’s New York, Yamashita Park (a fantastic Barney’s, incidentally, that overlooks the bay, Marine Tower, and the iconic skyline of Sakuragicho.) I remember us drinking up the osmanthus notes in the head, but being slightly disappointed by what happened next (often the case for me with Ms Mecheri’s perfumes). I was also deeply disappointed by the Osmanthus that was released later by Ormonde Jayne, a scent to me that smelled harsh, ozonic, floral, like an airline handwash or the ‘complimentary’ body lotions you get given in hotels.

…..and she feeds you tea and oranges

that come all the way from China

and just when you mean to tell her

that you have no love to give her

then she gets you on her wavelength

and she lets the river answer….

– this famously hyperdelicate work by Jean Claude Ellena a very original, watery thing; brushstokes of evocative, minimalist notes that come together in a diffident, slightly haunting manner. The perfume still doesn’t quite work for me personally ( I always feel it is lacking that essential something) though I intuitively know that I would love to spend an afternoon with someone who it suited. A girl like Suzanne, perhaps.

As a straight, and beautifully rendered literal osmanthus, The Different Company’s take on the flower, Osmanthus, by the same perfumer, is unbeatable I would say, having all those delicate, but enticing, mood-balmingly light, petalled apricots and a gentle, hay-laced dry down – a perfume so unthreatening as to verge on boring, but which any osmanthus lover worth her salt categorically needs in her collection. Personally, though, I think I prefer to smell an osmanthus note interwoven with other materials, cushioning the essence in a mixed media scenario to bring out more the flower’s intrinsic mystery. Fig tea, by Parfums Nicolaï, is a brilliant, but not much talked about, delightful eau fraîche that pairs jasmine, osmanthus and tea notes in a subtle but arresting manner that makes it the perfect scent for spring and summer. Fresh, yet enigmatic. Serge Lutens’ extravagant voluptuary Datura Noir melanges the jammy, apricotted flowers with coconut, poisonous blooms, and other aphrodisiacs to intriguing, almost tropical, effect; a perfume that seems to smell differently on me each time I try it ( which is why I have never committed). My favourite osmanthus perfume, though, is probably one that you might not associate with the flower: Patou’s almost grimly beautiful 1000 ( particularly in its stunning vintage parfum form, which is like nothing else in terms of ingredient quality and peculiar, inspired execution. Odd, wistful, green notes in the head (coriander, violet leaf), dwell alongside a very natural osmanthus absolute, while further down in the heart is a bewitching, shimmering well of animalics, geranium, jasmine, rose, patchouli and sandalwood. Here, osmanthus really comes into her own: she is given deeper, more spellbinding powers we did not realize she had; reigning intuitively above those elegant cloud formations below, the immaculate orchestration typical of classical French perfumery that make this scent, for me,  one of the most effortlessly poised ( if snob-drenched), perfumes ever created. Here, the osmanthus becomes a queen.

And a queen who is perhaps not as predictable as we had thought.  Because, this year, in fact, she is late (off with her head!!!!) It was October the fourth yesterday, and although I had seen orange clusters forming slowly on the tree outside my window, it wasn’t until walking down the hill towards the station yesterday that I suddenly felt assailed by orange musks: by an intense, floating veil of apricot-tinted flowers (it sometimes feels, synaesthetically, as if the very air were hued differently when the osmanthus flowers are in bloom..) There was a group of school girls walking down by the hydrangea temple, Meigetsuin, and at first I thought it must be them, that their mothers’ perfume had somehow infiltrated into their school uniforms, but then, I realized, yes! It’s out. The Osmanthus. Where is it coming from? ( I love that game; be it jasmine, lilac, hyacinths: when you know, as clear as day, that the flowers are blooming somewhere, even if other people can’t smell them, and just to be proven right you have to go off and locate them…)

Yes. So the next couple of weeks here in Kamakura will all be about osmanthus. The train doors will open at night and I will walk right out into it. Drifting on the air like ethereal marshmallows, insinuating iself into every Autumn nook. Gorgeous, sense-adultering loveliness………but finally (and every year this happens) it becomes almost sickening, one is osmanthus’d out; as though the goddess Amaterasu, on peachy whim, had drained a cannister of osmanthus/apricot-scented airfreshener out into the universe, celestial fingertips lazily and unconciously pressing sssspray, while we mortals feel it descend from the blue, tantalizing us with its subtle, billowing softness; then, gradually, feminizing us out of male consciousness til we yearn for some air; then; one’s wishes granted, the autumn storms come, right on cue, washing the tiny little petals in great unfinished showers onto the street; pools of osmanthus, detached, scattered, like frantic, unwedded confetti. You watch these disembroidered flowers falling like twirling sycomore seeds to the ground, and know a particular season, a specific time of year is over. Another year passed; eyes now towards Christmas, New Year. Not that long, now, til the narcissus. 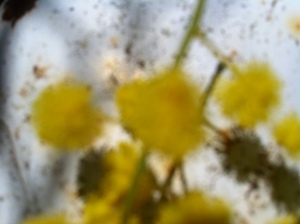 It has been a pleasure getting acquainted with the Nicolai collection: clear, well made perfumes not to think about, just wear (there are no ‘concepts’). Mimosaïque is a delicious, honeyish mimosa – a short, somewhat room freshener-like top note soon cedes to a very real, fluffed up mimosa that is rather gorgeous. Underlying it is a rich, powdery, vanilla base (the perfumer, Patricia de Nicolai is the granddaughter of Pierre Guerlain, let’s not forget), so bear this in mind if you were hoping for a lighter mimosa scent.