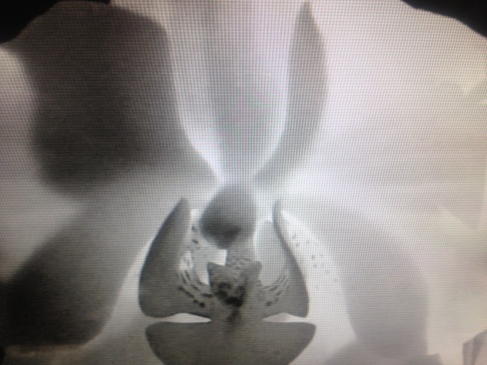 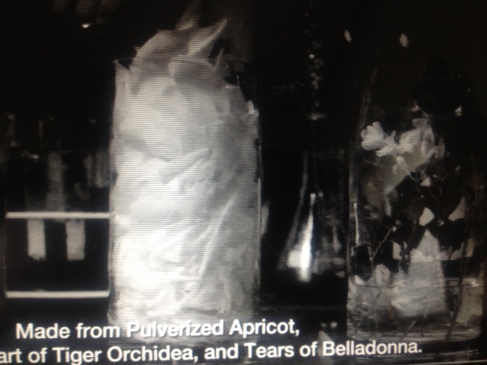 ‘Black, like the soul of fame, but invisible, once airborne…..‘ 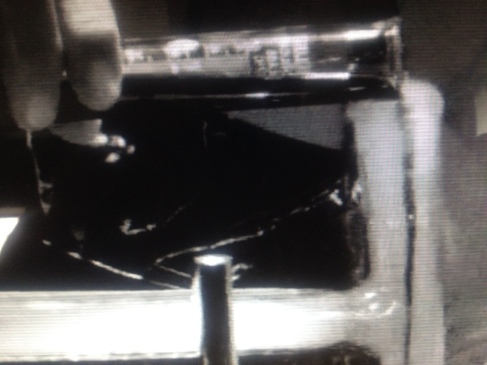 A dark, Baudelairean cry of lust…Les Fleurs du Mal Bouteillées; the souls of orchids bottled in an oneirically alchemic process.

That’s what Gaga and her cronies would have us believe, at least, taking advantage of her Little Monsters’ probable ignorance of all things perfumed, and deluging our souls with so much desire for this covetable mirage that our puny little hearts beat for it. 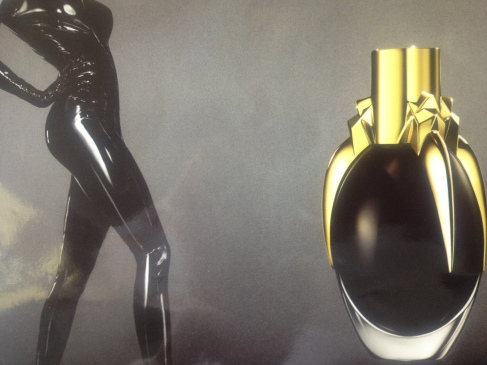 I happen to be one of these sad acolytes. Having resisted the whole Poker Face Moment, happily smug in my knowledge that Our Lady was a fake, I ignored her until  I was pressed into listening to Speechless, with its aching 70’s nostalgia, then – good God – Bad Romance, which to me is one of the most blisteringly brilliant songs of the last ten years – an exultant piece of dance pop that sends the spirits soaring (at karaoke it can border on a religious experience) – and by then I was hooked. (Telephone! the perfect amalgamation of sound and vision! Beyoncé in the Kill Bill video! What could possibly be so nothing and everything at one and the same time? What FUN….) then, most recently, of course, the Born This Way album which has truly been a joy these last two years, songs like Scheiße having some of the most ecstatic hooks I have ever heard: the woman has absolutely nailed the pop song +  art of wily visual manipulation.

There are plenty of people I know who think Ms Germanotta IS a fake; all is just hype, momentary fashion collaborative genius with her partner in crime Nicola Formichetti. She simply sunk her fangs into the zeitgeist and kept them there….

I do not agree: I feel she is real: I know it. But a performer is not a perfumer, and I was embarrassingly naïve to imagine there could be a palpable connection between the singer and her scent, even as she claims it ‘comes from her blood’. The deliciously fictitious ‘laboratory’ (which I fear some poor fools will literally think is where and how this perfume is made – this is very good marketing…) shows those bare-chested, anonymous men at that phantasmagorical, Poe-like assembly line, but the reality behind the masks is a faceless line-up of Coty business executives and their unprecedented push of global promotion for a scent that is nothing without its campaign. 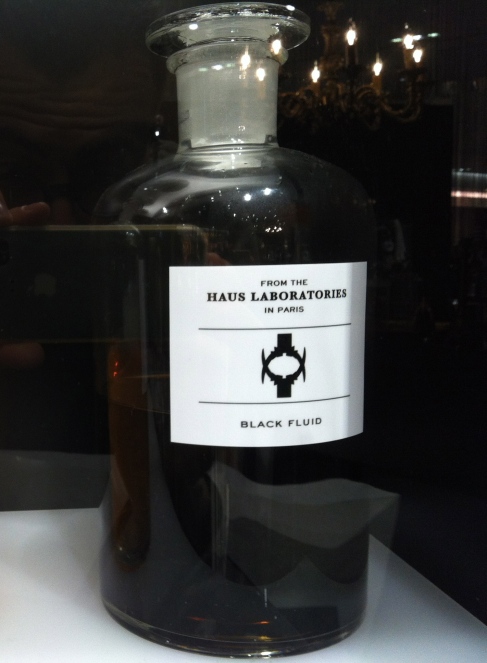 I had to get my paws on a bottle.

Until then I could not know for sure if the perfume was as shit as I secretly feared it could be. But I couldn’t do that because I was working – and hundreds, possibly even thousands of Tokyo fans had already overrun the Tokyu Plaza building in Omotesando, the day the fragrance was launched – exclusively, in the whole world, in just that one place – TANTALIZINGLY CLOSE ( I live just an hour away), and I was terrified it might have sold out.  My better half Duncan went on my behalf, on a mission to the edge of glory, to get that scent and bring it home to me…. 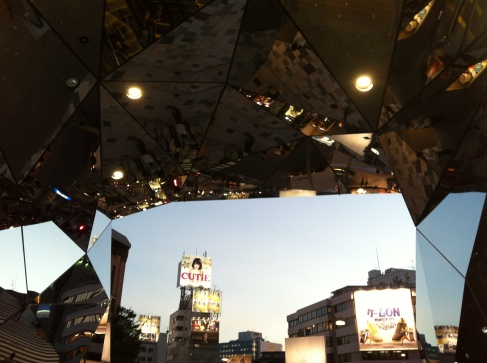 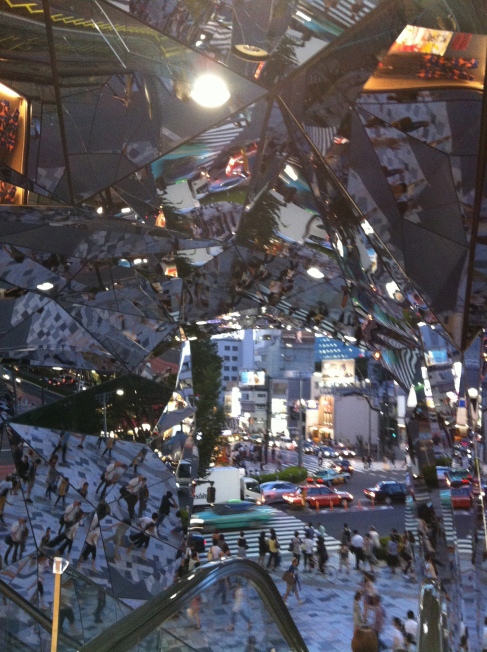 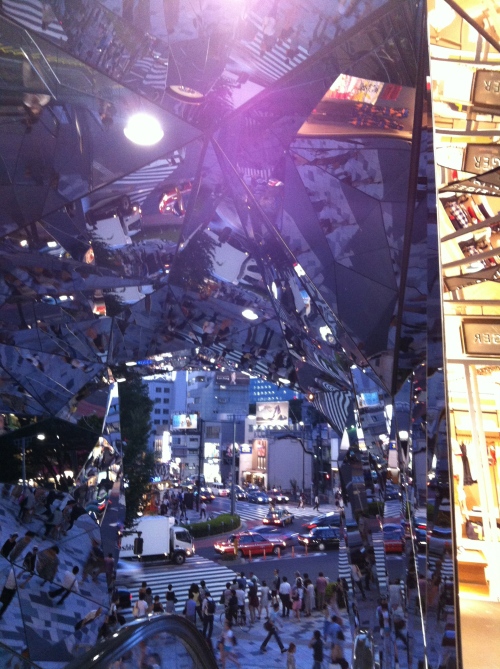 The vicarious pleasure of knowing he was there in that diamond-faceted building was as sweltering as the temperature outside; surreptitious phone messages between us as the photographs flooded into my iPhone:

– Nothing special? Nothing at all?

– But what about the saffron? WHAT ABOUT THE  PULVERIZED APRICOTS?

SURELY HE WAS WRONG. I was excited anyway, imagining that there might have been something in the ‘multi-tiered’ fragrance that Duncan had perhaps missed on just one cursory sniff; perhaps the ‘push and pull technology, by which the ingredients are mixed to highlight different aspects of each fragrant note at the same time, without any hierarchy’ had not allowed some of these precious notes to present themselves at that moment (isn’t self-delusion beautiful…?)

Perhaps he had only smelled the ‘honey drops’ and ‘light floral accord of Sambac jasmine and Tiger Orchid’, and not the incense and poisonous Belladonna said to lurk down beneath…I would draw them out when I got back home…….. 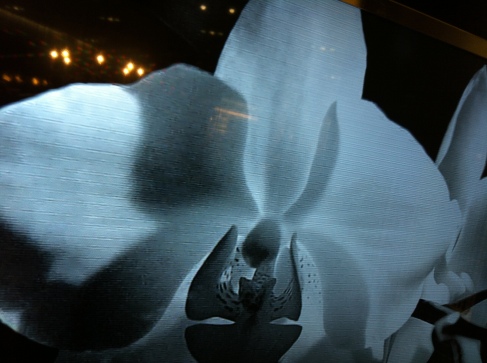 The saffron/peach/jasmine/incense idea has been done beautifully, and very strangely, by Pierre Montale in his obscure but gorgeous Velvet Flowers, which I think is a very original scent and wear occasionally in summer. The overdose of saffron in that perfume creates a hot, undulating sand veil of sensuality, and as I walked up the hill, singing Lady Gaga and anticipating something of the sort, blocking Duncan’s words from my head, I thought there must be something of that perfume in it……it might be a bit like the Montale.

THERE WILL BE SOMETHING.

I rushed into the kitchen.

There was the bag, designed with the black latex ad, and inside was the box. Lady Gaga Fame Black Fluid. 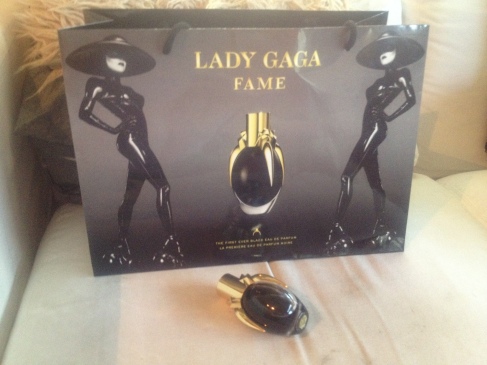 I tore it open, clutched the alien egg bottle, sweat streaming down my body from the heat of the journey back home, and sprayed that black liquid onto my arm.

I know this smell already.

Surely. Those sweet, cloying American notes; that candy-cane peach, those cheap, synthetic ‘flowers’…what is it what is it?

Wait: the saffron…it must be there. Where is it where is it…

if I REALLY concentrate, yes, perhaps there somewhere in the background.

And then heartfelt thanks to Duncan for sensibly buying the smallest 30ml bottle when I had said I wanted the so-called Masterpiece 100ml. He knew it was shit and had rightly stuck right by his instincts.

Surely Gaga, who initially was said to be doing a cover of Etat Libre d’Orange’s shocking Secrétions Magnifiques (see my review), with its repellent notes of blood, sweat and sperm, would have brought out something different, original, shocking?

Could the supreme visualist be so lacking in that other, equally important sense? Or was she in fact barely involved in the ‘creative’ process at all?

I sprayed the room, I sprayed my arms; yes, I suppose it does just about add up to something; a Vanderbilt or Loulou for the 2010s, a fully formed perfume, just about, though mentioning those two sweet classics in the same sentence as this Black Swan-masquerading toilet duck feels almost blasphemous…

Fame doesn’t smell bad, it might even smell cute.

But it doesn’t have one ounce of originality, and the gaping void between style and substance has never been so mammoth.

In fact, it verges on genius, plugging up the lack of knowledge and self-confidence the general public has about scent with visual ploys and word-tricks that work beautifully.

We are beguiled by the lie, sold solely on the image: what we stupidly believe is a poisonous flower dripping honey and black magic, is a sweet, nasty nothing.