The infant-baiting song ‘His majesty the baby’, by Scottish singer Momus, has a protagonist who ‘swallows breasts as big as mountains’ and commands the attention of a cooing clan of women, much to the singer’s disgust and jealousy. The ‘bald and dribbling little git’ has his audience rapt and can do no wrong.

This is also, incidentally,  the theme of Etat Libre d’Orange’s ‘Divin Enfant’: the story of a baby, a ‘polymorphic pervert’, who smells so beautiful and sweet that he can pull the cotton wool over your doting eyes and behave like the devil.

Or so they’d have you believe

(“ …..leather and cold tobacco, a shrilling symbol of our sleepless nights….” )

In fact, this is probably the softest, cutest and easiest to wear of all orange blossoms. The threatened leather (‘the faked innocence of a demon’) barely materializes; except as a duvet, over which the orange blossom, (rounded, tamed, baby-friendly) reigns.

The Etat Libre d’Orange perfumes all have a very human quality.  The first impressions are generally flashy and ‘philosophical’, but the ends usually smell like real peoples’ lives.  In the case of Jasmin Et Cigarette, rather than designing a perfume to be worn in a late night bar, the company hilariously put the end result of this scenario (the morning after) actually in the perfume.  And so the top note of a beautifully fresh, living jasmine flower,  delicate, alive, kidnapped directly from nature,  is soon taken over, convincingly,  by the stale aroma of cigarette butts stubbed out by Saturday night careless punters in some overflowing,  snooker club’s ashtray.  Having myself actually on occasion at teenage parties mistakenly drunk from a beer glass in which someone’s fag had been extinguished, and paid the subsequent wrenching,  bog-heaving price,  I must say that I personally find this mouth of ashes hard to take.

On some skins, though, that resinous tobacco note, like swirls of cigarette smoke encircling a floral smelling shirt, achieves the Dietrich-ish pall the perfumer probably intended:  a tanked-up floozy; laughing, not giving a shit, and raucously lording it up in some late night saloon with her mates.   On my friend Laurie (the only perfume she will wear),  I have to say that this perfume really does smell kind of glorious. Strangely trustworthy and endearing; peculiarly vulnerable, with its contradictory angles of fag and flower;  butt and bloom, there is real poetry.

The majority though  (the moral majority…. …yes)  will obviously just smell spent,  trashed and unacceptable in this perfume ; a weeny bit dirty and annihilated.

Probably one to be avoided. 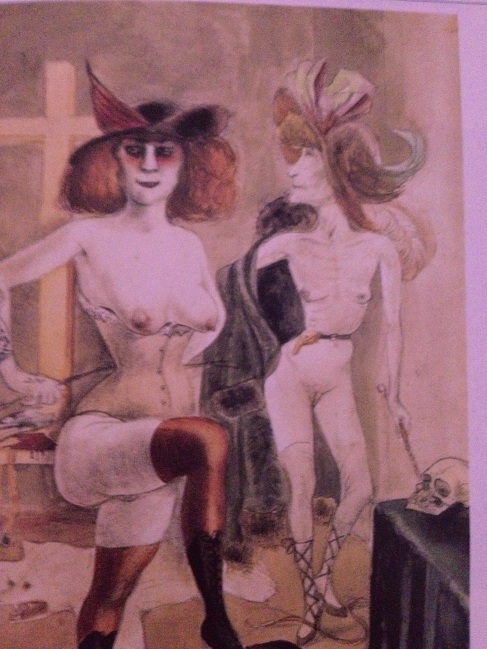 “ I hate perfume. Perfume is too often an ethereal corset trapping everyone in the same unnatural shape…an opaque shell concealing everything – revealing nothing. People who smell like everyone else disgust me.”

I love perfume. But I can readily understand why there are many who don’t. Leaving aside issues of environmentalism, chemical sensitivity, and the invasion of private space – how dare you force me to smell what I might not want to? – there is the nature of the scents themselves, which, since the beginning of commercial perfumery, have taken a target demographic, forged a concept, and, through consumer testing, moulded easily digestible, recognizable (and irritating) accords for the masses. As such, what you’ve had essentially is invisible designer branding – olfactory Louis Vuitton (or Topshop) handbags that you smell wherever you go.

In this age of blogo-Facebook individualism, it was clear that the revolution would eventually have to happen even in the invisible world of scent. And it has. Two central figures have featured in this: Christopher Brosius, who started the legendary Demeter Fragrance Library, and then went on to create the cult favourite CB I Hate Perfume line; and Rei Kawakubo of Comme Des Garcons, a brand with some of the most iconoclastic contemporary perfumes on its roster. Others have since followed in their wake, and there is now a whole subculture of underground perfumers making scents with no limits to the imagination. It is an exciting time.

But what is ‘antiperfume?’ If the ideal of perfume is to make you smell good, is antiperfume’s to smell bad? Sometimes it would seem so. But they can also be freeing, funny, and refreshing. There is an almost punk-like anarchism at work here, with such deliberately provocative names as Earthworm, Crayon, Pruning Shears and Dust (the list goes on) by Demeter: Wild Hunt and In The Library by I Hate Perfume; and Dry Cleaning, Tar, and Garage by Comme Des Garcons (which even has a Guerilla Series, suggesting an actual attack on perfume.)

The war cry of Paris outfit Etat Libre D’Orange, who supposedly give their perfumers complete creative freedom, and also published a manifesto, is ‘Perfume is dead! Long live perfume!’ and the results of their labours can be found scattered throughout the perfumed universe. Among them are Charogne (carcass), Secrétions Magnifiques, and Putain des Palaces (Hotel Slut). But are they good smells? It is all a matter of taste. Comme Des Garcons’ Odeur 53, the first widely released antiperfume with its notes of photocopiers, burnt rubber and ‘freshness of oxygen’, is a popular example of this type. I personally think it is vile. It did, however, smell completely new when it was released and that was the whole point.

If you have never found a perfume to your liking, are drawn to the idea of a kind of scented dada, or just see yourself as something of an olfacto-warrior, you might find something distinctive here. You do, however, sometimes have to see beyond the futuristic bravura and hype: the concepts may excite, but more often than not, the scents themselves are more bourgeois, aromatically speaking, than the blurb would have you believe.

Ultimately, the new perfumers are simply trying to expand the parameters of what perfume is: no perfumer will release something he thinks doesn’t smell good. Christopher B, in the second, deliberately contradictory stanza of his manifesto, writes:

“I love perfume. Perfume is a signpost to our true selves: a different journey for the brave to travel. Perfume is an art that shows us who we can be if we dare – an invisible portrait of who we are.’