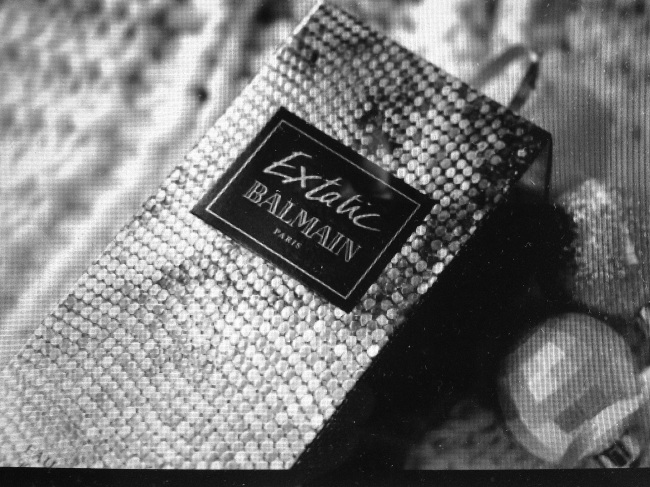 Although I unfortunately didn’t manage to get to all my usual London perfume haunts on this recent trip to England – those treasure troves of scent I love to frequent, at my indulgent leisure, such as Harrods Haute Parfumerie, Rouillier White and Les Senteurs (mainly due to time constraints, a busy perfumista schedule and my torn, mangled knee), I did manage luckily to get my hands on several samples during this trip away, as well as having ample time in airports and the odd Birmingham department store to peruse the latest fayre.

And although we probably can’t realistically expect a fabled perfume/fashion house such as Pierre Balmain, instigator of simplicity, elegance – the ‘architecture of movement’ – to produce, in this modern perfume apartheid class system of plebeian, high street trash vs moneyed, ‘higher class’ ‘private collection’ quality (don’t you hate this recent tiered, dystopian, capitalist division along class lines in perfumes?) ….a new, compelling release that could even begin to compare with the beautiful classics of its stable – Vent Vert, Jolie Madame, Miss Balmain, Ivoire…..ah, just writing their names invokes sighs of regret and despair at the current state of the crass, materialist world – we can at least, surely, cradling our inner idealist, hope for a perfume, with that gentle, creamy caress of a name on its flacon, that will not merely make us moan in irritated recognition; make us toss, vehemently, the vexing, plastic tester spray across the room and hit the wall.

Admittedly, as the fragrance, marketed obviously in an attempt to ‘funk up’ the brand with its deliberately misspelled play on mind-bending substances, bright lights and parr-tayys in the manner of Jimmy Choo (‘Flash!’), begins to heat itself up on the skin, it is no way near as bad as what the opening conceptual mess might seem to suggest. And it is at this stage that I begin to understand what the fabricators of this scent were attempting to achieve: a bridge, if you like, between the eighties, the nineties, and the last two decades (who just don’t have a nifty name for them) in terms of style and appeal. The makers, it would seem, are trying to have a bit of that recognisable rosy ‘old school perfume glamour’ in their new scent, while still maintaining the tight, chemical sheen that is a prerequisite in any contemporary high street release (where there seems to be some kind of inherent dictate that there shall no great distinction between the perfume that a woman wears and the scent of the bathroom that she frequents when she is out with the girls.)

Yes, there are tiny intimations, here in the final, fully played out accord, of the richer, more plangent roses of times past: the lightly spiced, rose-leather-chypres such as Fendi; Armani Pour Femme, and, with the more balsamic notes apparently featured such as the ‘chocolatey Sharry Baby Orchid’, ‘night jasmine’, and ‘Barania leather’ (apparently the flagship cowhide of Balmain); also, a warmth and vague suggestion of sweet, rose bloomed opulence that makes you think, briefly, of Trésor or even Bulgari Pour Femme. Though undoubtedly vulgar, there is something in these latter stages of this perfume that might smell quite shoulder-baringly ‘sexy’ on the woman who has been carried away by the advertising copy (” a feminine and sparkling fragrance full of daring and sensuality “) (such bullshit!!), and the perfume does, at least, in these stages, have some coherence (unlike the aforementioned Jimmy Choo). I suppose it is not so bad, and you could do far worse, certainly, in a cynical, over-egged market of high street and Duty Free garbage that quite frankly you are better off not smelling on the way to your destination for honest fear that it might cause you nausea .

And yet you could, it also has to be said, do so much better.

What I object to, currently, and I would love to spark up a discussion about this, actually, even though I know it has already been talked about before, is not only the aforementioned widening divide between the rich and the poor in scent, but also the gargantuan disconnect between the advertising copy we read about in magazines – for those very cheapos – that somehow just drives the knife in even deeper: the truly luscious sounding ‘ingredients’ that are supposedly used in the perfumes advertised, that you read about avidly on Fragrantica, Escentual, as well as in magazines, and then the cheap, and often quite nasty reality of the scents when you actually try them on your skin.

Is it just me, or is the divide between fantasy and reality some kind of death-chortling chasm?

Obviously it is only my subjective opinion what any perfume smells or doesn’t smell like, but the descriptions, here, of ‘nashi pear, osmanthus, and crystalline rose’ with lashings of ‘dark iris’, ‘amyris’, and whatnot, not to mention the orchid, make you imagine that what you are about to smell might be something lovely, at the very least something pleasant .

But you are not. What you are about to smell in fact just feels excruciatingly, laughably overfamiliar and painstakingly obvious. And, terribly for Balmain, formerly a house of great taste and luxury ( listen: I think I can hear Germaine Cellier, innovative creator of such beautiful, beautiful perfumes, silently weeping in her grave), a perfume that is utterly devoid of beauty.

One Sunday morning, Duncan and I went to a Cassavetes retrospective in Tokyo. Although it was something of an effort to get up so early to be at the cinema by 10.40am, I knew it would be worth it. Having seen ‘Opening Night’ (1977) twice before, but never on the big screen, I knew that it would be a rare opportunity to gaze at the mesmerizing face of possibly my favourite actress, Gena Rowlands, who, as the character Myrtle Gordon – a confused, emotionally flailing star, plunges willingly into a masochistic rabbit hole of self-doubt, hallucination and tragedy in the pursuit of theatrical technique and authenticity.

The first time I saw the film I was alone. It was Autumn, about twelve years ago, and I had never even heard of Cassavetes. I had just randomly picked the film from a video shop in Fujisawa, and sat down on the tatami to watch it as the crisp October sun dappled on the garden outside. A shadowy melancholia was present already in the room, and this set the mood perfectly for a film that had me wide-eyed in love: I had never seen anything so seamless, and while stylized and oddball, so real. It was the ultimate ‘star gone mad’ film, and somewhat tediously and obviously perhaps on my part perhaps, I reached out for my vintage miniature of Ungaro’s Diva (a gorgeously rich Turkish rose chypre), this forming the scented backdrop to the film (eyes on the screen, back of hand attached to nose: a frequent pose in my cinematic viewing).  I have forever associated its rich complexity with Ms Rowlands ever since: this WAS the smell of Opening Night for me.The character – glamorous, chic, fiercely intelligent and feeling, but troubled and angry (and rightly so), I imagined would wear a scent that is full bodied and carnal at heart, yet with an unpenetrable enamel of enigma at surface.

Watching that day, enraptured by the beauty of this film and totally unable to take my eyes off Gena Rowlands: the flick of those hard-hitting blue eyes, her thick, blonde-curled hair, that alabaster skin, another perfume suddenly floated up into my consciousness, particularly in the scene where she is about to ascend in the elevator with Ben Gazzara in a long cream fur coat…..

IVOIRE. Yes! Ivoire de Balmain, that deep, feminine creation from another age when scents were orchestral and beautiful, and embraced the full female corporality, rather than the one-note pink sex bunnies we too often get these days. Thinking about it now, though both perfumes came out after the film, and Diva seemed perfect at the time, the Balmain somehow wins out. Diva is too joyous, too throaty. Ivoire is more brittle and vulnerable, yet so attractive, out of reach.

Yes, this is how she would smell.

Also because this scent truly strikes me as being a perfume made for blondes. Although I bought it for my (brunette) mother over twenty years ago (having spent an entire day in Birmingham department stores trying out scores of different perfumes to find the ultimate scent for her birthday), she found it too sweet. Too something. Not quite right. And thus I soaked a pale-leather diary I took with me to Rome that year (it still vaguely smells of Ivoire), and everytime I wrote about any experience there, on the train to the coast, on the streets of Testaccio, this scent would waft up and mingle with my associations.

I first encountered it, though, at Cambridge when I was nineteen. A friend of mine at Queen’s, Dawn – a sybaritic, self-indulgent History of Art student with blonde honey hair who lazed about half the day in shiny cream satin pyjamas – wore this (or the divine Courrèges in Blue) and she always smelled incredible. Quite dazzling. Sweet, soapily fresh, sensual, yet somehow out of reach. Divine. She would send us out for cigarettes and sandwiches on blustery sunny days and for some reason, like idiots we always complied, possessed by the feeling in that room.

The composition of that scent is complex, yet as smooth, and cool, as marble. Rich and full: yet cold, the departure a fresh, green aldehydic sheen of galbanum, bergamot, mandarin, violet, and lily-of-the-valley, blended effortlessly with a lushly creamy heart achieved with an interesting juxtaposition of flowers and spices: Turkish rose, ylang ylang and jasmine overlayed with a dusting of nutmeg, cinnamon and berry pepper (the scent has something in common with L’Air Du Temps and Fidji in this respect: those ethereal spiced garlands that encircle the flowers and lift them up higher to the heavens). Then: a slow, langourous base of labdanum, sandalwood (which dominates), vetiver, tonka bean and vanilla.

The concept of ivory is realised around the intense binding of all these ingredients together so we experience at once a smoothness – the scent as clean and fresh as a newly laundered blouse in tulle – yet underlying it all a buttery, emotive decadence…..

Myrtle Gordon ultimately triumphs with her voyage to the heart of her instincts.  And backstage, where buckets of champagne lie on ice, she is drunk on her success. The effect would be, I believe, deliciously, heartbreakingly, compounded with Ivoire.

Note: I have two bottles of this perfume. A vintage eau de toilette found in a Zushi recycle shop (how my heart leapt when I saw it!), and a new, reformulated edition from The Perfume Shop in Solihull. The difference is astonishing. What was flat, and disappointing to me (was this really how it smelled? Had I exaggerated it in my mind?) is alive and glowing in the vintage. I hope you have the opportunity to try it.