MARY MAGDALENE IN ECSTACY & THE PERFUMES OF DR VRANJES 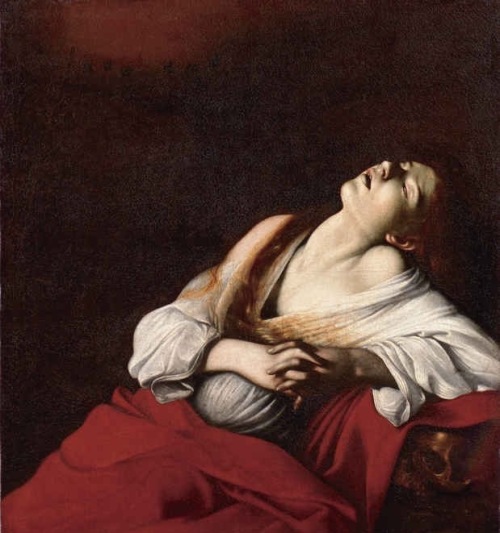 I have just been ravished by Caravaggio.

The exhibition at the Tokyo Museum Of Western Art – Caravaggio and his friends, rivals, and enemies – featured some of the baroque painter’s most iconic images, including his Bacchus and Medusa as well as the Narcissus, a murky, shadow-filled painting you could easily get lost in, caught between reality and reflection.

But it was the above painting, Mary Magdalene In Ecstacy, that most transfixed me. A world premiere – it was only recently discovered – this strange,  powerfully ambiguous painting ( which the  image above does no justice to: in fact shown this picture by Duncan on the train up here it made almost no impression on me ) in actual reality had me rooted to the spot: mesmerized. I could have stood before her, drinking her in, all day.

Is this religious ecstacy? Is it sexual ecstacy? Is she near death? The expression in her eyes and on her lips in the presence of the real painting is beyond description, palpable in the hushed melee of people gathering round it, like me, in stunned contemplation. The life force present in the painting, the force of its energy, were overwhelming. It is the best painting I have ever seen.

This exhibition also took me back to my time in Rome, when I would wander aimlessly around the eternal city, stopping in a church or two to admire the Caravaggio triptychs – so perfect in their rightful context – as they also were at an exhibition of his I went to there ( almost a quarter of a century ago, now) where the lights would be turned off at intervals and his miraculous chiaroscuro effects shown to their best advantage. His world of the high and the low; of saints and sinners; of priests and angels and murderers and street prostitutes, captured exquisitely, and perpetually, in the passionate stroke of a brush. 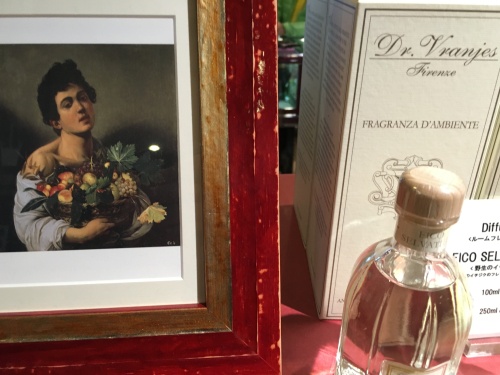 We emerged from the exhibition, had a cake and coffee in the cafe overlooking the garden as the feelings from that painting almost resonated me to tears ( I love the ABSORPTION of such an exhibition; the transference of centuries; to think that Mary Magdalene has been in that frightening, unearthly, painfully euphoric state for four centuries already and hopefully will be for all eternity; it takes you out of yourself for a time, and lets other souls, from other times, fill you up for a moment instead. Purification. A catharsis) but outside, on sale along with the usual memorabilia, along with an array of all things Italian – wine, olive oil, artisanal crafts and objets d’art ( this exhibition was held to celebrate the 150th anniversary of diplomatic relations between Italy and Japan ( and the Japanese are total Italophiles : I usually go to the packed out Italian film festival in Ginza every year )), was a selection of perfumes ( really room fragrances, though most of them are so good you could wear them as perfumes ) by Dr Vranjes di Firenze, a Florentine purveyor of fine fragrance who has a huge range of perfumes of every olfactory style, from airy and refreshing ( I have also enjoyed the atypically natural smelling Acqua and Aria ), hale and herbaceous – I once had a bottle of Timo Lavanda – a thyme scent I really enjoyed. – through oriental ( the delicious Mandarino Vaniglia ) and the subtly sense- inviting wild fig perfume Fico Selvatico, pictured above .

Only Rosso Nobile, though, the quintessential Dr Vranjes perfume and the most popular, seemed to have a vague olfactory connection to the paintings of Michelangelo Caravaggio: like his flushed, sensual Bacchus slyly holding his glass of vino rosso, this scent is rich, drenched in wine grapes, and like everything else at this exhibition, made me just yearn to jump on a plane back to Rome.