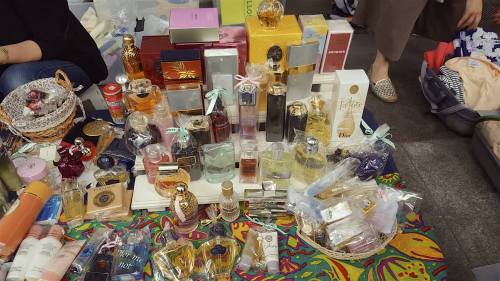 Aaagggh! My friend Joan just, or a few hours ago, out of the blue, or I only just noticed it because I was too absorbed in Downton Abbey, sends me a message, and a picture attached, saying

‘fancy any of these?’

GrrrrrrrrrrrrrrrrrrrI need to be there, where it is (it looks like Shinagawa flea market, which recently has yielded absolutely nothing), NOW, barter a little bit; hoover it all up. All the Shalimars, maybe even the Jade Jagger redesigned bottle, if it is cheap enough, even if I don’t quite like the juice as much.  I need those refills though so I can just spray wantonly. Carelessly. And I have just spotted a Must Parfum ( isn’t it? or you tell me, is it the edt? ) which I don’t have a full bottle of and WANT. Real treasure. Gorgeous. Those original Chanel No 19 EDPs in the silver square bottles, also, particularly, which I remember with great fondness from my university days and have never  personally used (I always remember it being sharper, crisper, more irisey and green. AAAAAAAAGGGH I WANT THEM.)

And isn’t that Guerlain’s Winter Delice at the back, on the left? I need it! Only the other day, while vacuuming, D unearthed my miniature of this delicious and strange sweet frankincense delight, which is down at most, now, to two Christmas Day helpings (when I really like to wear it). The full bottle I once had, and cherished, he once used in some performance piece or other (almost choking the audience to death) and it somehow got lost. God knows how. I was really disappointed. It is one of those singular, unrepeatable fragrances that have ‘acquired taste’ written all over them, and how fantastic it would be to have a brand new bottle again. A weird coincidence. And people, what is the Allegoria at the front with the pink ribbon? Don’t I need it? Can you identify it? I have a great fondness for the Allegorias. I have a dream of one day coming across a bottle of the gorgeous Lys Soleia. Could it possibly be that?

Looking more intently, to the back, it’s true that I already have a bottle of Boudoir, which I love to wear on occasion –   it totally suits me, oddly enough –  but bizarrely, I gave my bottle of Vivienne Westwood Sin Garden, the flanker, to Duncan to give to a Dominatrix Mistress of Tokyo only yesterday, for her ‘Haunted Carnival’ rope tying party last night (I wasn’t up to going, but she had recently sent me get well flowers and I wanted to return the favour, and who doesn’t like being given an unexpected bottle of perfume? ) He promised he would try to get me another bottle if he ever came across one again – and here one is ( or is it, in fact, another Westwood perfume that I rather like:  : : :  Libertine?)

What else do we espy among the plastic wrapped semi-detritus selection of fine ‘vintage’ perfume splayed out on a blanket at the flea market? Eau Sauvage Extreme; love it, but my one bottle is quite enough ( I wear it on occasion and remember my delicate youth) ; Dolce Vita – want; Poison – want (that is Burning Bush’s true signature scent now) ; Tresor – want; and that isn’t that Gucci Eau De Parfum, is it, the thing at the front, that orange blossom heliotrope delight that is so cuddly and comforting ? WANT. Hypnotic Poison? Want. . And I am not right in thinking that we can see a vintage, probably parfum, of that increasingly endangered species, the incredible spice animal that is Yves Saint Laurent’s original, unreformulated, Opium?  WANT.

Is there anything I fancy?

Pretty much the whole damn lot.

Tagged as because I wear it, cheap tokyo perfume, How can it be that whenever I go to the Shinagawa Flea Market recently there is nothing but when my friend goes just one stall has all this, intangible eighties bonanza, stocking up, the invidious, the tantalizing