Our meanderings around the lively entertainment district of Isezakicho in Yokohama – a long pedestrianised shopping street which leads from the historical portside town of Kannai south-westerly to the seamy Bandobashi and Koganecho neighbourhoods – often yield fabulous scent bargains, and yesterday was no exception, with Ginza bagging a rare bottle of Must de Cartier II Eau Fraiche!

In the summer, we often wait until mid afternoon to head out and we have a regular route in Isezakicho, which takes in a motley medley of junk shops, recycle boutiques, secondhand bookstores, bygone kissaten (old fashioned cafes serving industrial-strength German roast kohi), an art cinema (called Jack and Betty), and restaurants (Isezakicho is Yokohama’s Asian quarter and the best place to eat Thai and Vietnamese nosh). It’s a fascinating mishmash of trashy (bling hip hop gear, knockoff perfumes, hostess heels and lurid flounciness), highstreet bargain basements (Uniqlo, Bookoff), sex (massage parlour soapland, host/ess bars), and throwback exotica (for example, the bizarre ‘hebiya’ or snake shop, which has pythons suspended in jars of formaldehyde and stuffed scaly things in the window).

It’s without doubt one of the most unaffected and racially mixed disticts in the whole of culturally homogenous and manically regulated Japan – a bit of an outlaw zone actually, a Yokohama ghetto, though it actually feels very safe from a British perspective. Some find it too cheap and close to the bone (let’s not deny the dark exploitative side of the sex trade, which is here in abundance and pretty much impossible to ignore) – but we have come to love this Little Asia, this rather chilled and disreputable entertainment zone. There’s a lot in it if you look carefully. As the Japanese proverb goes: ‘The reverse side has its reverse side’; or to mangle Wilde, even stars are reflected in the gutter! 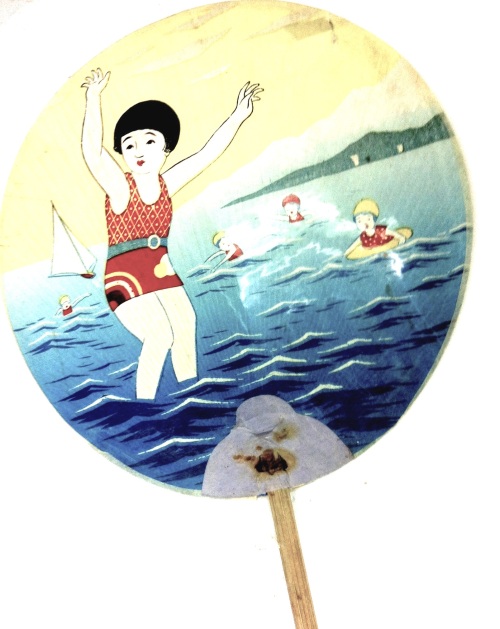 Yesterday, we started off with a glass of Freixenet on a grass verge in the ‘old man park’ in an adjacent street because Ginza wanted to bask in the sun before hitting our haunts. I’m not good at staying still for long but it was good to quaff some sparkly with the old stick who had been taken up with ‘summer seminar’ onerousness for eight days on the trot. About two hours of rummaging threw up some good reads (best of all being: ‘The Incorruptibles – A Study of the Incorruption of the Bodies of Various Catholic Saints and Beati’ by Joan Carroll Cruz – a New Orleans homemaker who writes of inexplicably preserved corpses at night because she ‘simply cannot tolerate writing if there is housework left undone’!), cheapy T-shirts and ties (elegant blue green silk CK stripes for 100 yen), and a clutch of perfumes (aforementioned Cartier, plus Vol de Nuit spray parfum, and KL Parfum: the folding fan bottle perched in/on an 80s grey and pink semicular prism case).

As Ginza can’t resist opening up his olfactory treasures on the street even as we are in transit, and then testing them out on available limb space, I was lucky to be doused with Must de Cartier II Eau Fraiche, which I had never heard of but which I immediately took to, as it fits well with the effect I prize when mixing light citrus colognes and simple vetiver scents to bring zing to wood and add heft to zest; indeed, a more elegantly and sensually rounded citric vetiver swathe could hardly be imagined. Cartier nailed it. Too bad this scent was discontinued. Boo.

So I have bagsy-ed this delicious accord and am planning to make it my summer signature scent. The opening is zesty but soapy, even a little proper in a luxuriant way (top notes: mandarin orange, hyacinth, peach, and lemon) and yet as the scent settles a jasmine/daffodil tang emerges sensually melding the citrus on top with the mossy vetiver beneath.

It’s a bit like the love child of Christian Dior’s Jules and Armani Eau Pour Homme – these were two scents that sprung to mind – but whereas as Jules always felt heavy-handed and smelt a tad urinous on me – especially in Japanese summer (yuck) – and Armani is perhaps a touch too reserved and dry/citric-cerebral (much as I admire it, it fades a little too enigmatically on my skin), Eau Fraiche is finely made and fully realised, refreshingly and sexily elegant. (Ginza pointed out that there is a resemblance to vintage Diorella as well – some muscularity under the citrus top notes.)

And so we ended our day admiring the Cartier and ogling Mrs Cruz’s incorruptible ancients and pickled nuns propped up in alcoves, prostrate in glass cases (St. Teresa Margaret of the Sacred Heart in Florence is below) – all over a fine Thai meal in a plush newish restaurant we hadn’t clocked before with white leather, purple, gold and silver decor, a disco ball, toddlers tumbling about on the banquettes, Siam karaoke on loop, interspersed with Gaga, Madonna, and Soft Cell (by us), and plentiful Chang beer to lubricate the colourful corruptions of summer. 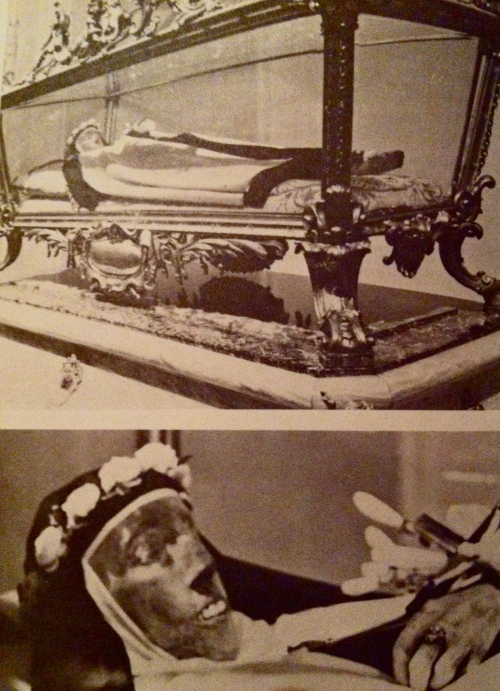 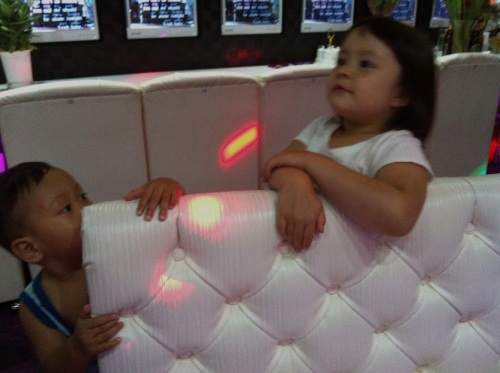 We looked yesterday at the crass state of mainstream perfumery and the nasal malaise, even misery, that is inflicted upon us by much of what is released in the name of ‘fragrance’. And standing, exhausted, in the interminable terminal of Dubai airport tragically trying to kill eight hours before my flight back to Tokyo last Thursday, I would occasionally pick up the odd scent from the Duty Free concessions, lift it to my nose, and put it back down again.

Approaching the Cartier stand, I saw some scents I had never heard of for some reason, and thought I might as well give them a try. Before I go any further, though, I should admit, to my great shame, that I have never smelled any of the much lauded Heures by in-house perfumer Mathilde Laurent, chiefly because they don’t seem to have them in Tokyo (there are not all too many women on the Ginza who want to smell of horses), and because I have just never seemed to come across them anywhere else either.

Otherwise, when it comes to Cartier, my knowledge is limited to the marvellous Must parfum, that belly-filling, complex, lustful oriental that I have always enjoyed to the max, and also the great Panthère, a over-jewelled, opulent, eighties femme fatale floriental prism that nevertheless, when I met a girl called Anoushka at Cambridge who was wearing it to some formal event one evening, gave me a mad, synaesthesic reaction akin to cerebral fireworks: my head was spinning, I was lifted out of reality and genuinely seeing colours; I was honestly not quite myself there for a moment. Damn that thing smelled sexy. On the wrong person it could have been tacky, for sure, but on her it was 100% magnifique erotique, and the feeling of having been knocked for six by such a perfectly coutured woman-to-scent melding would surely feature in one of my top ten perfume experiences of all time.

Then there was Santos – a rigid, austere, silver-haired, tight-jawed masculine that I would rather die than wear myself but which I imagine I could probably be seduced by if the right man was wearing it: a taut, no-nonsense eighties, surreptiously aggressive macho number that nevertheless managed to withold some dignity and reserve, just enough mystery to make you want to find out more (what would he look like out of that immaculately tailored suit?)

The same could not be said for some of the recent mainstream releases I have smelled by Cartier. I did rather like So Pretty in a way, despite its slight over-insistence (… I AM pretty!!!), and spent an enjoyable Air France flight lulled pleasantly in its neo-classical floral trail, as the flight attendant walked by me down the aisle each time and I would catch its suggestive, ripped-stockinged end-trails on the air….

As for Cartier’s other perfumes (and fill me in on any I am not mentioning here), I know that people say good things about Le Baiser Du Dragon, but I personally just thought it was about as ferocious as a lemon-pink chihuahua and nowhere near as appealing; and as for ‘Les Delices’ ……..(ugh!) that actually made me feel physically nauseated it was so artificial, sugared and cheap – repugnant even.

So it was with rather blasé trepidation that I picked up the unfamiliar bottles of Baiser Volé (‘stolen kiss’) in eau de toilette, and essence de parfum. In fact, despite the appealing bottle – smooth shouldered, simple, ergonomic in its thick, glassed contours – I think I already had my eye-rolled, bored, expression in place: to receive, knowing perfectly well in advance, or so I imagined, exactly what to expect.

Instead, what greeted my nose was a rarity in a mainstream release: a fully realized, idiosyncratic, perfectly executed scent of character that made my eyes start: Wow!! A perfume of quality: different yet familiar (always a good thing in a work of art I feel; I sometimes think that the familiarity of something, even when it is starkly innovative, suggests universality); fresh, beautiful, yet also modern, futuristic even. Although I didn’t spray it on my hand ( I don’t do lily), here was a scent that set my mind free for a few moments: a dreamy, airy, contemporary magnolia/lily, holistic in its white-tubed completion; rounded, vanillic, shimmering and resourceful in its integrity, and I think that this, this truth essence at the heart of a scent, is what is key for me.

As a committed, manic cinephile with certain tastes, I think I probably differ from many people in my criteria for enjoying a film. Plot, tension, character, all the usual box-ticking (villain! hero! award-seeking acting! triumph over adversity! requisite action sequences! ) are personally far, far less important to me than atmosphere, cinematography, aesthetics, and a sense that this is the film that the director wanted to make. The vast majority of films, I feel, are consensus-built, test audienced, paint-by-numbers efforts that cater to banal commercial requirements and often just come out as ready-mades: fast food products that can satisfy on certain levels ( I watch all kinds of films), but, it has to be said, rarely touch the soul. The kind of films I like, or become obsessed by myself are the ones that seem not to have been compromised, that are the true vision of their creator. Whether they have a happy or tragic ending, where something dramatic happens or doesn’t, I don’t care a jot as I long as I am immersed in their vision and trust in it implicitly. And the same theory holds true for perfumery. While there are always commercial and financial prerogatives in the launch of a new scent, a talented perfumer, like a film auteur, has a vision, genuine inspiration, and will try to execute it as well as s/he can. ‘Extatic’, the risible scent I described on yesterday’s post, was clearly a group effort, trying, so blatantly, to cash in on certain empty clichés that would only appeal to a mindless fool. But the soulful perfume enthusiast will recognize in Baiser Volé, even if he or she doesn’t necessarily like it personally, something intact, real, a finished idea, polished to perfection. Unlike Jour d’Hermès, which everyone raved about but which I myself found distinctly unappealling, even horrible, with its amorphous, abstract, weird synthetic ‘florality’, Baiser Volé is a commerically viable, luminescent white floral that is far more suggestive of a new, optimistic dawn; lilian, feminine, enigmatic, and stupendously pretty.