Tag Archives: WHAT HAPPENS WHEN PEOPLE LIVE WITH THEIR HEAD IN THE CLOUDS AND DON’T MAKE ENOUGH CONTACT WITH REALITY

DISASTER AT THE AIRPORT & THE FIRST REVIEW OF MY BOOK 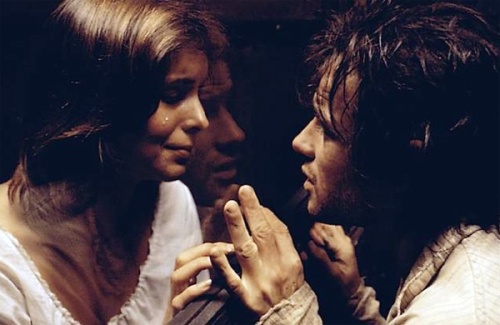 The journey back to England began horrendously.

We were safely at the airport, on time, and I went through customs. And Duncan was taking a long time. Much longer than he should have been taking, when you usually go straight through. I waited. What was going on? Had he suddenly been taken ill? There is  a history of fainting. But he had been fine, both of us were, really excited to be coming back to England for a bit for my designated five minutes of fame and I couldn’t quite imagine that that was the case. Something was delaying him.I considered looking at the Chanel concession, but the thought bore me to death. I looked to see what other Duty Free there was, but why was he taking so long. And the clock was ticking, boarding was becoming an imminent necessity. And still he hadn’t passed immigration. But with all the officers and plexiglass and barriers you can’t go back, obviously, and I couldn’t see what was happening. But finally, when I went to the far right, the ingress for the officials, and,  there he was……. 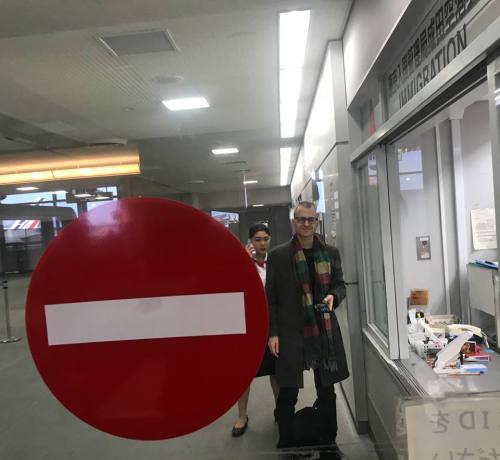 HIS VISA HAD RUN OUT – HE HAD FORGOTTEN TO CHECK, AND HE COULDN’T FLY. `

The red no entry sign. The not being able to talk to each other or kiss or hug goodbye – we were like Pyramus and Thisbe, whispering through walls. I was utterly gutted and speechless. And no idea what to do. And I decided to continue, because the tickets are so expensive from Japan – fixed at vastly elevated prices – and I have radio interviews; a big launch party and a family gathering yesterday evening to celebrate (fantastic – a really lovely evening), but I had no choice but to get onto the miserable plane alone, crying cheap tears watching A Star Is Born and Bohemian Rhapsody, and then gradually , slowly, as all the booze sunk in, drawn in and mesmerized by the real cinema of First Man and the first flight to the moon, which allowed me, for a while, to finally forget the empty seat next to me and endure the sleepless 12 hour journey to Paris, where I smelled the vile chemical miasmas of all the disgusting perfumes on offer and felt nauseous at how foul contemporary perfume is;  got on a plane to Birmingham but had a panic attack becauseI didn’t have an aisle seat as requested; then switched and sat next to a man I started talking to – a Pakistani hypnotherapist from Leicester who was amazingly interesting and who absorbed some of my pent up stress; and we talked about the meaning of life; our hatred of the strictures of nationality, and agreed that all culture is a strait jacket and that ultimately, all we really care about is being free.  Fascinating. And I finally got my suitcase, which took so long…..met my parents waiting for me at arrivals, who hugged and commiserated me on the lack of D and arrived home utterly zonked, stinking,  and exhausted and unable to even properly utter any sentences.

D, back in Japan going through the bureaucratic motions, is going to do his darnedest to get the visa sorted out and pay for another flight as I NEED HIM HERE. This is my time: the book comes out next week, I am going to be in Japan Vogue (!!!!!!!!!!), on BBC London Radio (!), the devastatingly trendy Monocle Radio (what to wear?!) as well as Talk Radio Europe, with a potential listening audience of two million people, a fact that I find incomprehensible, especially considering that I stutter and garble and will just sound like a gibbering idiot probably and will just have had breakfast at Duncan’s parents’ house – IF HE GETS HERE- and

Anyway I just felt I needed to share some of that in an update. It was a hideous journey out. But I must say that it was s a marvellous antidote, the next day to discover that  the lovely Persolaise, who received an advance copy of my book a few weeks ago, had reviewed it on his website : the timing couldn’t have been better for me – and what a lovely balm to my mangled nerves.

Here is the review:

I couldn’t be more pleased with what he says about it. Being fully aware of its flaws and lacks – he mentions that I forgot to include scents such as Habit Rouge (and how could I have forgotten Geoffrey Beene’s Green Flannel  in either the violet or green chapter?) something I realised after the fact – it was a MAELSTROM of stress and deadlines last summer and I honestly almost lost my mind at one point, there are so many omissions and things that got lost in the mania of the final edit…..and I suppose as the writer of  the thing I sometimes forget that there might be good things about the book as well: it was lovely, and very gratifying, therefore, to have someone else’s reaction to the thing after being stuck so much in my own head, someone who knows more than I do about perfume and is a great writer himself. I am delighted.

We had a wonderful family party last night, with my aunt, uncle, cousins and second cousins, animated and hilarious, like the parties of my childhood, and a moving champagne toast by my dad, and I feel quite exhilarated about the coming two weeks here – I just have to seize the moment. The sun is out, even if it was just sleeting as well for a few minutes (the weather here is insane), and I feel very much here, and present, and in the moment. Quite happy.

I really could have done without the drama at immigration though.

I felt sick to the pit of my stomach.

Tagged as OH BILLY, PERFUME : IN SEARCH OF YOUR SIGNATURE SCENT REVIEW, WHAT HAPPENS WHEN PEOPLE LIVE WITH THEIR HEAD IN THE CLOUDS AND DON'T MAKE ENOUGH CONTACT WITH REALITY, WHY IS THE WEATHER IN ENGLAND SO GODDAMN CHANGEABLE, YEARNING FOR REAL CINEMA