On Monday morning at Strawberry Fields in Kamakura I had a naughtyish splurge on a cache : for sixty pounds sterling, a vintage 30ml Opium parfum, a No 19, a Caron Fleurs De Rocaille extrait, but these were kind of thrown in, really, because the real purchase, and prize, was this vintage edition of Amouage Cristal for men ( or possibly Gold? Experts please weigh in ) that was roaring to me silently from the top of the glass shelf.

The bottom of the bottle says Cristal, apparently a rare perfume on eBay that sells for around 1,000 dollars  – the Japanese internet has one for half that 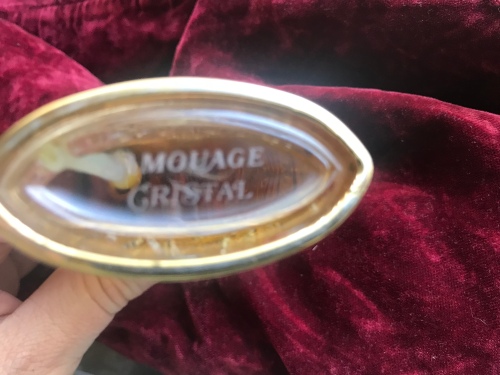 but the notes do seem to match those of Gold, an intense ( though this word doesn’t do it justice, not remotely ; I have never known anything like it ), aldehydically animalic, musky soapy floral that smells just like a pristine extract of Madame Rochas parfum on United Arab Emirates steroids and cristillated to spectacularly nuclear strength.

The second I sprayed this oily, golden slick of perfume on the back of my hand I experienced a delirium tremens of being enveloped, head to toe, in regal downiness and flowers; rose, jasmine, but most specifically a powdery sandalwood and overall smell that reminded me very specifically of Imperial Leather soap – which I have always loved, and can use up a whole bar of in one long sitting…………….despite the swirl of richness gradually coalescing into one skin smell, the overall feeling is definitely that familiar scent; I use the talc and the deodorant spray, and having this too as the main event after all that initial background pampering will be orgiastically pleasurable for me. I was practically WRITHING on the train back home in olfactory arousal: tending and loosening like a cat in heat ……  perhaps the sublimated civet, that I experience without consciously sensing it: some secret code of sensuality immersed in the blend that makes it just so horny yet so MAJESTIQUE.

D was having none of it.

“Musky, soapy floral, like taking a bath in the clawfoot tub of my gtandmother’s house in the seventies “

“I got through the initial blast of granny’s partially soiled bloomers, tiptoeing around the house trying to avoid my wife”,

Most other reviewers spin variations on this ‘old lady’ incontinence theme ( WHICH I DON’T GET AT ALL ::: I JUST SMELL SWOONWORTHY ARAB PRINCES IN WHITE ROBES )

As another reviewer of the perfume says,    (as I mentioned I think this perfume must be Gold, (though please correct me if I am wrong) / could the ‘cristal’ on the glass be just referring to the material of which the bottle is made? It does feel ludicrously expensive]] 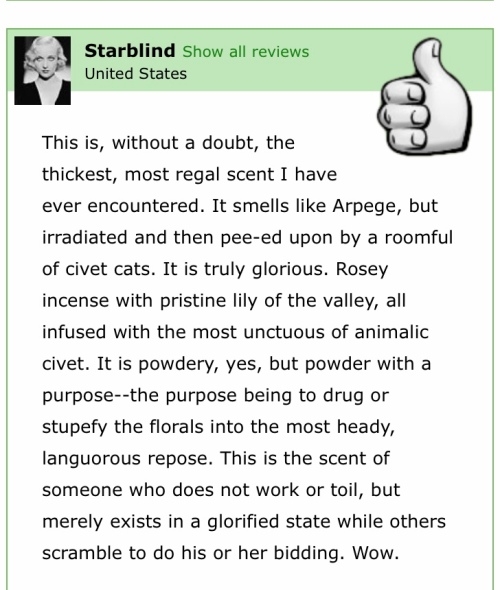 Yes. That was what I was wanting to say.

Wow is precisely the word I would use to describe this extravagant creation.

Which obviously I am only going to be able to wear indulgently alone, doors locked and bolted ,at home.

Tagged as Amouage vintage classics, AMOUAGE VINTAGE GOLD FOR MEN IN ORIGINAL CRISTAL BOTTLE REVIEW, animalic as fuck but sublimated, CRAZED REVIEWS IN A JAPANESE CAFE DURING WORK LUNCHTIME, DON'T BRING THIS BOTTLE IN YOUR SUIT JACKET, glorious aldehydes, Madame Rochas lives on in a thobe, onanistic aldehydes, pissy missy, When you dissent from your lover