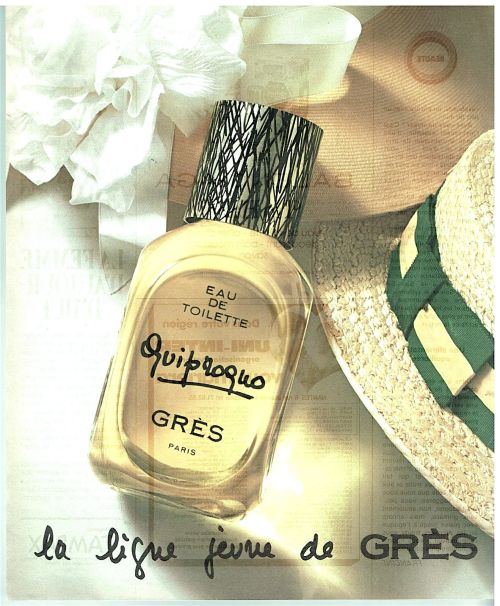 Cabochard, Bernard Chant’s classic patchouli chypre from 1959, looms large and elegantly in the Parisian canon as an archetype, and it is not surprising therefore that the house of Madame Grès should have wanted to capitalize on its success with a perfume that was the same, essentially, but different: a Cabochard re-made for a new generation.

Quiproquo, one of the rarest of my vintage finds in Tokyo antique shops, is a reworking of the powdery patchouli of its exquisitely tailored predecessor, in the sportier, eau fraîche style of Ô de Lancome (an in-house restitching in those more seventies, tennis-white contours), and a quick internet search has  confirmed my instincts: both were created by the same perfumer, Robert Gonnon (who was obviously something of a genius – he also made Métal, Anaïs Anaïs, and Empreinte among others; all delicate, yet shadowed, creatures that I adore…)

Less floral and vetivered than Ô, whose pre-reformulation was one of the greatest, cold-creamy citruses ever made, Quiproquo has the imprint of her older sister but with smoother brow, a more relaxed, upbeat scent overlaid with the brightest, most perfect lemon-leaf head-notes: like pinching the leaves from the trees, ripping them apart and letting their essence ravish your hands as you raise them up to smell on a cool, summer’s day. This gorgeous opening then subdues to a more refined, citrus-powdery chypre note as QPQ, having made her point on this dramatic family reunion, settles down for a game of scrabble with flinty Cabochard: :  French windows open, siblings easing into familiarity (their strikingly similar younger brother, Monsieur Grès (1982) has also made it up to the house for the weekend), mineral water sparkling in glasses, breeze from the gardens and tennis lawns, this Saturday late in May, drifting in gently.