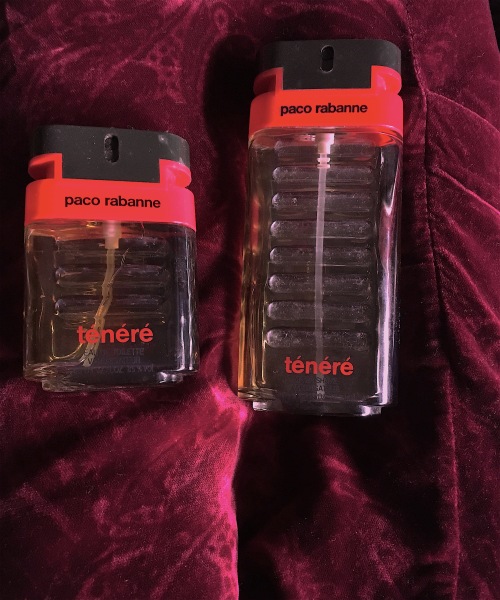 Now this really was a flop. Nobody quite knew what to make of it: a red, red (it really smelled red), highly complex and cultured aromatic fougere that was, from a certain perspective, a very distant relative of Kouros:  all Mediterranean and hairy-chested, sexed up and ready, with its brutish, yet seductive and convincing fullness of man-juice: spice (carnation and cinnamon), a flush, honeyed, anisic rose heart poisoned with artemisia and jasmine, and a musky, leathery, ambered patchouli and cedarish base.

Despite the rabid sensuality at the heart of this peculiar ‘floral’, however, there was also a very appealing, fresh, and regenerating contrast in the opening accords of grapefruit, cassis, bergamot, rosemary, lavender and a delightfully uplifting green note that made the scent (I own two bottles, as you can see) strangely affecting, even touching, on a crisp, Autumn morning. One of those smells that contrasted perfectly with the piercing, exterior, sunlight of optimism, when you simultataneously breathe in the lung-icing air around you and the scent on your body and just feel happy.

Yet despite its appeal (to me, at any rate), the scent is undeniably difficult. Illegible. Original and daring. But really quite hard to pin down – Duncan, just smelling it on my hand as I write this said : “Wow, interesting. Really interesting. Penetrating”. It was. But, despite its very masculine credentials at base, it was a floral. And a weird, green, spiced, herbaceous one at that, with a big dollop of animalic honey lurking somewhere at the centre. And men didn’t know what to do with such a scent. Not with all their insecurities. Especially in 1988, when Thatcher and Reagan were in power;  things were simplistic and crass, and men walked about in their ‘colognes’ smelled like open-chested gorillas. Top that with the fact that on the wrong day and in the wrong weather – on a hot day, the rich red hint of Tenere would boil down on me to a sweaty tomato ketchup – and it was obvious that Rabanne had a commercial failure on their hands. It was quickly withdrawn –  almost as soon as it was released:  just another concoction consigned to the sad, perfumed graveyard. Like the similarly discontinued La Nuit, though – by far Paco’s most exciting and audacious scent – it remains, to me at least, one of their most interesting.