ON THE ART OF JAPANESE INCENSE, AND ZEN BY SHISEIDO (2001)

In ‘Japanese Cultural Code Words: 233 Key Terms That Explain the Attitudes and Behaviour of the Japanese’, author Boye Lafayette de Mente talks of the ‘grave beauty’ of Japan and its effect on blundering westerners encountering it for the first time.

‘Foreigners are often left speechless…They know they are in the presence of extraordinary beauty, but generally they do not have the experience – or the vocabulary – to describe it.’

It is difficult to argue with this. The austere, filtering light of incense smoke unfurling slowly above a Zen temple in December; the strict symmetry of the Japanese interior; or the tranquillity of a Zen garden in spring, can be astounding in their otherworldliness, yet still of the utmost simplicity. Whatever the chosen ‘path’- be it zen, tea, kimono, haiku, calligraphy – the Japanese are surely unsurpassed in their almost fanatical dedication to perfecting an art, paring it down, revealing its ‘essence.’

Of the traditional arts, kodo, or ‘way of incense’, has perhaps faded the most into obscurity, practiced only by a select (high class) few. Morbid associations with the Buddhist wake and funeral rites, where incense is continually burnt, are enough to prevent your average Nihon-jin from lighting up a stick on a Saturday afternoon. So while every large town will have a Buddhist shop stocked with a wide selection of incense, the main products on display are the dark, polished, expensive household shrines bought for the worship of ancestors: incense is just an accessory for this. (Japan is not a religious country as such; it’s usual to pick and mix – you have a ‘Christian’ wedding, a Shinto new year, and a Buddhist funeral – but it is a stickler for tradition.)

Kodo, probably a dying art, does persist in pockets of Japan however, and I was lucky once to be invited to an incense ceremony in the strictly-no-admittance third floor of zen capital Kamakura’s premier incense establishment. The first floor of the shop sells exquisite boxes of incense, from soft floral blends (iris, rose) to the finest kyara and jinko (agarwood): powdered, musky sandalwoods blended with the strange, dark resins and spices (clove, camphor, among others) that make Japanese incense so unique. I was very excited to get an invitation. Not equipped, though, with the requisite dignity, linguistic skills, or social status even, to blend successfully into the background of the ceremony (what were foreigners doing there?!) 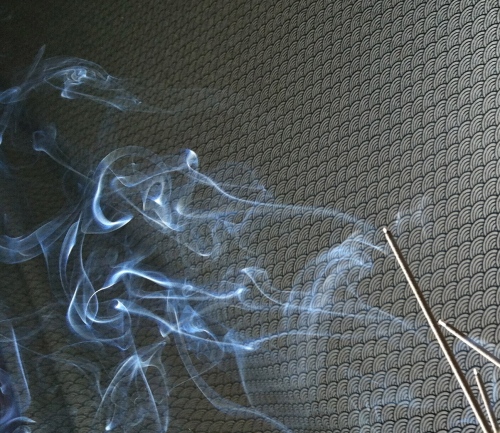 In fact my friend Claire and I were late, which was truly unthinkable. Going up the dark, carpeted, airless stairs to the second, then hallowed third floor – social climbing with the gentry of Kamakura – we arrived twenty minutes after the ladies had begun: standing with trepidation before a closed, silent shoji screen.

The door was opened: and there we stood, flustered and embarrassed, then horribly hot-under-collar as Claire’s thigh-boot zip stuck, and we stumbled, almost falling over as we tried to wrench it off. Total buffoons. We were not a class act, and there they sat, in the incense room – purse-lipped, barely blinking, immaculately turned out Kamakura ladies with not a hair out of place; staring, concealing whatever pity/irritation they felt for these coarse intruders under the blank, expressionless Noh mask that every Japanese learns to perfect.

Once perched on our mats in the Japanese style, an embroidered cloth over Claire’s knees (“there are gentlemen present”) we did our utmost to blend as well as we could into invisibility and watch what was taking place. Which, though snobbish and somewhat self-congratulatory, was in fact fascinating – so esoteric and removed from daily life as to be astonishing.

The incense master gently passed round, on a small plate for the purpose, a tiny, smouldering piece of the finest kyara (the most prized wood in the world); a scent that is part patchouli, part vetiver, part cannabis, part pepper – but drier, more sinewy and powerful than all: true opiate.

With eyes closed, each ‘listener’ (you ‘listen’ to incense) would have to try to guess the ‘name’ of the piece of wood the fragment came from: ‘Moon in the grove’, ‘Still waters at Izu’ and so on (each is subtlely different; particularly prized specimens are in fact priceless, and stored as investments by banks and other institutions). But name guessing, difficult even in English, was only the beginning. The bearer of the kyara would then, in elegant, calligraphic kanji, compose a haiku, an ode to the incense, while the others looked on.

Such excruciating refinement was clearly beyond such mortals as ourselves; we fumbled, mumbling – and couldn’t begin to perfect the slow, beckoning motion of smoke to bearer that to the ladies was second nature (you don’t just stick your nose in). And with the unbearable pins and needles from the sitting pose, the torturous, pained, poetic silences; the grim-lipped patience of the ladies, the forbidding circular zen window that gave only glimpses of the world outside (“let us out!”) it took great stamina not to burst out with hysterical laughter (we did, in great gusts, as soon as we fell out into the sunshine). Yet the scent in the room, as precious perfumed materials gave off their spirit, was extraordinary.

The above scene illustrates fairly well I think the Japanese attitude to scent. These ladies were unscented themselves; the smell of the burning wood strictly exterior to the body, to be ‘listened to’, a communing with hidden ghosts. The body itself should be kept clean: at a Japanese hot spring, the length of time spent soaping down – everyone naked, together, child-like almost – before thoroughly rinsing with water, can seem bizarre to foreigners. Some people spend the whole day washing, then entering the waters, then washing again. This goes far beyond mere bodily hygiene: it is ritualistic, has been this way since antiquity. In fact, hot springs (onsen) are not only a way to relax, but a form of purification and spiritual reflection.  Having sat in pools under trees in the light of the moon, listening to the night, you feel cleaner, more serene than you can possibly imagine. You smell of nothing but water.

Yet Japan is of course also a nation much influenced by the West: ideas, goods flow in, are transmuted to the Japanese ideal, incorporated in the culture. It is a society of appearance, and thus of status symbols. Look at the success of Vuitton, Gucci, Dior here: status is big, and perfume (though a relatively small market in Japan) is an inevitable consequence of a desire for conspicuous consumption. Pass a group of old ladies dressed in their finest and you may catch a drift of Guerlain’s Mitsouko or Vol de Nuit – two well established classics; walk by some twenty somethings, a whiff of the latest pinky Dior. But it is still possible, probable even, to ride a crowded train packed with hundreds of people and smell no perfume. Kosui hasn’t really caught on: not deep down, and I doubt it ever will. The recent rush of incense perfumes on the market, some Japanese themed such as Comme des Garcons Incense Kyoto, Santa Maria Novella’s ‘Citta di Kyoto’, are strictly for westerners chasing the exotic – such perfumes would rarely, if ever, be worn by Japanese themselves. You never smell an oriental here.

What, then, is Japanese perfume?

And the ‘smell’ of Zen? In a Kamakura zen temple, the scents that fill the air: incense, fresh water, wood: blue breath of hydrangeas; wind in bamboo; osmanthus; pine, stone.

With Zen: Perfumed Essence, Shiseido is therefore attempting the impossible. Trying to incorporate this Japaneseness, this purity, in a fresh, floral, commercial blend designed to appeal to the ‘spiritual’ aspects of the fashion conscious on both sides of the east/west divide. Really it is a contradiction in terms. But the company apparently employed the latest research in aromachology to find scents that would relax and transport the wearer to a nicer place than stress; a neatly packaged product- zen for the twenty first century. And you might say that Shiseido does a good job here, providing you don’t take too seriously the words inscribed on the box.

The possibility of this perfume being the source of an enlightenment is, I would say, fairly low, but the composition is very pleasant: clean, fragrant – a calmer, purer version of Eternity and other white woody florals. The green of the bamboo leaf lingers intriguingly, momentarily, over fresh laboratory flowers and perfectly controlled, light woody essences that give the scent a certain grace. A hint, just a hint, of kyara underlines the whole. 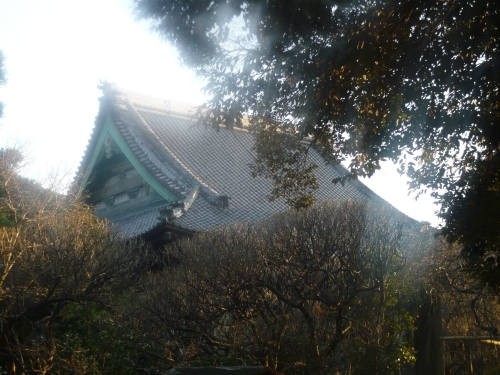 Essentially a pleasant perfume to wear to the office (not really a fragrance ‘to inspire moments of quiet meditation’), Zen could be dismissed as yet another faceless addition to an overcrowded genre. But there is indeed something – a luminous, white cloud of Japaneseness suspended above the scent – that almost lives up to its name.