Mastic, or pistacia lentiscus, is a rare ingredient in perfumery, particularly as the most prominent note in a fragrance. A bitter green resin, which forms from the ‘tears’ of liquid mastic when the trees are lacerated (on the Greek island of Chios, the only place the gum is produced), it was used as a remedy for snakebite in ancient Greece and regularly employed as an incense. Legend has it that as St Isodorus cried out in pain during his martyrdom, God blessed the mastic tree, which then began to cry……

Such lachrymosal stories are the foundation of Eau d’Ikar, a spiky, sapful scent based on green notes, resins and florals, agreeably poetic in concept and execution, but which I don’t find entirely works. The perfume is described by the company as happy and revitalizing, and while it is certainly stimulating, and very green – almost startlingly so – I can’t think of it as happy. 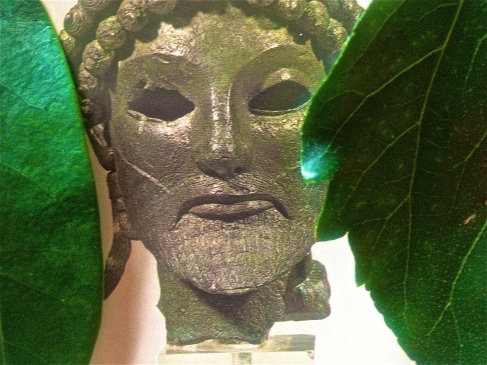 In fact, given that the scent, and even the bottle (in very eighties frosted glass, reminiscent of Cerruti 1881 and Paloma Picasso’s similarly themed Minotaure) is based on the tragic tale of a quixotic, restless young naïve (Icarus), who is burnt by the sun and drowned by the sea, it is not surprising that the overall impression is morose.

Some reviewers have compared Eau d’Ikar to several classical citruses such as Dior’s Eau Sauvage or Eau d’Orange Verte d’Hermès, but what immediately struck me on spraying this refreshingly unclichéd masculine was its curious resemblance to Estée Lauder’s wonderful Private Collection, that beautifully supercilious seventies’ green-powdery with its arch, manicured talons; its diffidence, and impactful emotionality. The perfumes share a number of notes: galbanum, and bright citruses such as bergamot; florals in the heart of iris and jasmine, and the ambered woodiness of the base. But where Private Collection achieves compositional perfection (too much so, almost – the only complaint I have about the fragrances the company produces is their olfactory equivalent to a flawless, patina of exquisite make-up that leaves little room to breathe), Eau d’Ikar, with its rough hewn maleness, has a strange impetuousness – the sense that things are not quite sewn together.

On the skin, the two in the later stages become at times almost indistinguishable. But where Private Collection has a much more natural balance, the chakras passing right through uninhibited from base to tip, Ikar is clogged up with mastic: feathers and wood bound together with wax, sweat, and honey.

The scent comes on forceful and green, with a waxen smell you could almost rub between your fingers: mastic, tea, bergamot, carrot seed, lemon, extract of reed, and a sour, fruity smell like just picked blackcurrants that contorts the mouth – the hard, white eye of youthful determination – as Icarus and his father Daedalus strive to escape from the labyrinth and the minotaur. At this stage, the scent is difficult to like, yet alone love, with its sense in the stomach that something is not quite right. And yet this resinousness is bright and intriguing, like a flash of sparkling clarity on the blue Aegean that beckons from the sunbaked rocks.

Half an hour or so later, the perfume suddenly blooms; takes flight; when it becomes a quite haunting, powdered floral, quite beautiful and androgynous, with a sun starched, drier quality of vetiver and ambergris underneath and the resinous note of mastic lingering throughout. The Hellenic feel is authentic here, and Sisley do achieve something akin to impressive olfactory prose.  Still, I am not sure whether or not I would buy Eau d’Ikar (though I have considered it as a potential summer scent – there is something in the blend that pulls me in, some masochistic pleasure, even, in that bitter unpleasantness). What I do like about it though is the shimmer of shadows, the naturalness of the ingredients, the sense of erect integrity.

But it also has a thickness, an airlessness I am uncomfortable with: a suffocating dryness within its chlorophyll that encapsulates (if you really will yourself into the myth) the burned locks and parched lips of the dying ephebe: the shuddering of feathers; his sundazzled death chute as he falls, senseless, into the glittering Icarian sea.