Aside
↓ Jump to Comments

It has been raining in the city, and you are standing on the grey wet steps of a cathedral, where the chilling, ghostly incense from the years hangs in the rafters. A cold whiff of death, both religious and nihilistic; fungal in the dark reaches of its damp earthiness, Catholic in its liturgical implications.

L’Humeur A Rien, an obscure, long-gone, once formed part of L’Artisan Parfumeur’s ‘Sautes d’Humeur’, a limited edition set of five fragrances in a red satin-lined box; and it was my first ever introduction to an incense perfume. I remember standing in the King’s Road boutique in West London when it came out; transfixed and bewildered. So along with the satanically green-eyed snake of D’humour Jalouse (one of the most interesting green creations ever made), I decided on the spot that I had to own this original selection of scents that, though highly stimulating to my imagination as curios, were clearly, to me at least, unwearable.

But as it turned out, the ‘Mood Swings’ collection, according to the lady who sold me the perfumes, was in fact intended, just as I had intuited, as a collection of scents to ‘share with yourself’. To place a drop or two on the top of your hand, and then drift, the ‘nothing’ or ‘spiritual’ void of D’Humeur A Rien a watery evocation of the sinister and sacramental: a portal – brief – to another realm that would either comfort you in the material world or compound your yearnings for the hereafter. Never did it occur to me to put this on to go out anywhere as it is far too disheartening, even for a party at Halloween. Also, the visions of rainwater on stone floors of the beginning notes – the most fascinating part of the perfume – soon shifted to a smudgy, unpleasant, bad feeling that you felt you had to wash off. But that was the idea: a momentary glimpse of another life, or death…

At the time, I thought that this oddity was a true original as I had never come across anything else quite like it. Several years later, however, the idea of wearing incense started to catch on, and perfumes such as the seminal Incense Series by Comme Des Garcons (2002) brought about a distinctive change of sensibilities in which these arid, evocative, often sanctified substances smelled fashionable (especially when combined with more conventional woody notes, spices, new synthetics, and ambers); an impactful, wry new kind of antidote to the sweet and the floral. At first, to some extent, there was almost a novelty value – a ‘look at me I smell like a church’ aspect that had an aspect of the humorously blasphemous (smelling exactly like the high mass at Avignon might strike the religious as somewhat disrespectful); but in time, the scents have simply come to smell of the times – a bit edgy and knowing; often contemplative, and peculiarly erotic.

Black Amber is an elaborate frankincense composition by Swedish house Agonist, and comes with the requisite features we expect from an exclusive niche brand. Concept – the brooding melancholia of Bergman, Garbo and other despairing Scandinavian artistes;  the sculpture as perfume bottle, and the scent, crafted to place the wearer far beyond the plebeian reaches of the hoipolloi. 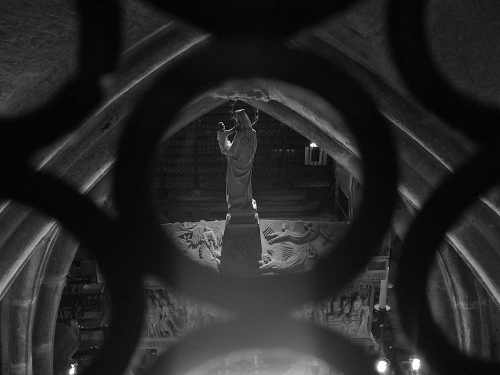 And Black Amber, in the scheme of the mainstream, is certainly no usual scent.  In niche terms, though, it strikes me as just another grey dirge of miseria. While it intrigues, somewhat, at first, with its strange, seaweed like-saltiness (from an unusual addition of red algae); its essence of nargarmotha, an Indian herb used in Ayurvedic medicine, and notes of tobacco blossom, artemisia and labdanum  to bolster the note of churchy olibanum, the plum-murk dinge of its centre has a bilgey corporality to it that feels like the mortar holding up the temple – an argillaceous wetness that takes some time, in the crypt, to solidify. This verging-on-unpleasant clay-feel comes from an uneasy underlayering sediment of ambergris, vanilla and sandalwood that takes away from the purity and sanctity of the frankincense (an essential oil I adore), while never sweetening or become soft enough, indeed ambered, to ever satisfy. It smells, to be honest, of ghoulish plasticine. Strangely, the perfume is billed as a walk in the forest, but to me, the frankincense, combined with other incense notes in the heart, can only be signifiers of church rites.

I know that Black Amber does have its disciples, so if you are aching for a sophisticated ‘anti-perfume’ , or an incense scent that contains no oudh (agarwood), you might want to seek this out. It is enigmatic, and of obviously high quality source materials. To me, though, these trendy black cloaks of ‘gloom’ can feel a little forced.

for a gothic twilight

just in your head

or blood red I forget

And your fake leather volumes jabbering on hell

Manifest decadence was what you hoped to exhale

Your eyes tried so hard to glitter

And you opened your legs

And so opened your heart

And let in the badness you claimed as your friend

And nonetheless I still write this Gothic love song

A sign to myself and the memory of my past

And a way to shut out your face