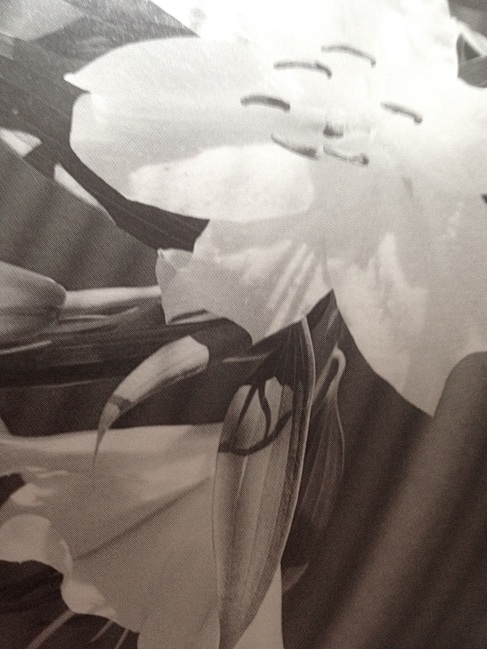 Tumbling down from the pillars of a church, delicately imbued with the lucent breath of God?

Or are they sexual narcotics, their ochre-pollened stamens beckoning, and trembling, with powder?

Some lilies, like the stargazers, are the latter, their fragrance drowsy and ineluctable.

And Penhaligons – usually the epitome of propriety – have here released one of the best lily perfumes I have smelled.

The cool breath of lilies and the casket. Crimson drapes; the light closed out.

Generic grieving of pipe organ (in the staff room they are drinking tea).

The lilies watch and permeate.

Other notes listed by Demeter: chrysanthemums (with stems and leaves), gladiolus. A hint of mahogany; ‘oriental carpet.’

I once knew a man in Marseilles called David, who had already envisioned his death: asphyxiation in a room full of white lilies. If this pretentious self-indulgence were to prove hard to arrange, however, if the local florist didn’t quite oblige, he might alternatively just spray bottles of this perfume, and stage little ‘mini-deaths’ in preparation for the big day: suffocate himself on Lutens.

Un Lys is lilies, lilies, liles (white, and church-like); with an expiration of leaves, and a judicious addition of light vanilla in the dry down.

Lutens’ most conservative creation, its strait-lacedness works to its advantage. He and his perfumers have rendered, almost to perfection, white yearning Casablancas on the cusp of full opening.

The lilies described above are all beautiful renditions of this haunting and ambivalent bloom, but when Lys Mediteranée appears in the room it is like an Olympic champion has just walked in and all the others must cow their heads in respect.

This lily is luminescent.

It is dazzling, bright, white, green, almost hideously fresh and alive and quite wonderful if you want to actually physically

transmute into a lily.