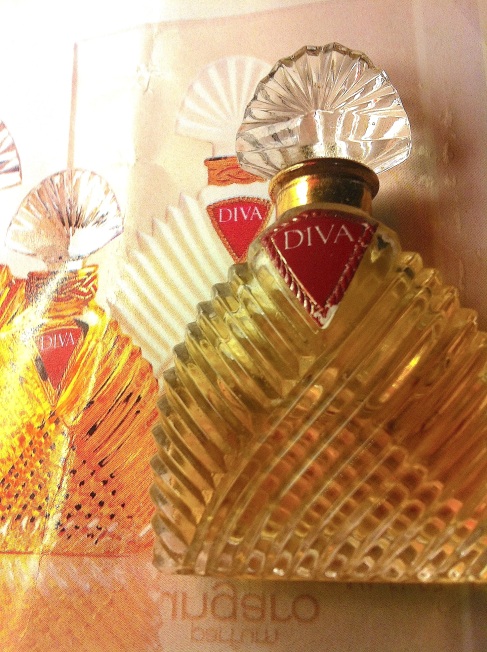 ” By the way, you’re such a diva”, a new acquaintance on Facebook said to me recently.

“He is”, said Duncan, picking up the thread.

Attention-seeking, a touch tempestuous and flamboyant, I suppose it might be true, but I do know one thing: I love that word. Diva. It evokes something besotted, rarified: a gilded, beautiful soprano on stage at La Scala. The audience in the palms of her outstretched, coloratura hands as she hangs on, virtuosically, to that tremulous, sky-piercing C and lets it voluptuously float, time-bound, to the rafters.

All eyes on her. They all have paid good money, there, for the diva.

Jacques Polge’s creation for Ungaro from 1983, a form of prelude or sketch for his later, more fleshed-out and carnivalesque Coco (1985), certainly lives up to its name: a voluminous, full-throated, honeyed spice-rose chypre that would conjure up crimson red theatre curtains even if you didn’t know its identity. But combined with the bottle – itself beautifully redolent of the ingenious draping techniques of couturier Emanuel Ungaro – and the name, Diva, placed strategically on red label in full centre of the flacon’s décolletage; this intentioned, orchestral plush of a perfume is one of those rare, fully realized executions- from head to toe – that in these often crass, vacuous days of contemporary perfumery feel as invaluable and priceless as a bruised and dazzling firebird like Maria Callas.

Sadly, though, Diva has not survived. Unlike Chanel’s Coco, which I was surprised to learn recently is still among the top-selling scents in the UK,  more highly ranked even than the insufferable Coco Mademoiselle (which, people, I DETEST) –  Ungaro’s first feminine, like all the finest operatic heroines such as Giacomo Puccini’s tragic Mimi, perishing selflessly in her frozen garret in the exquisite La Bohème, died a quiet, honourable death. In fact, though I own the parfum, which I found, to my intense delight, one fine Sunday morning at a fleamarket in Berlin, I had neglected even thinking about this gem for a very long time until yesterday morning, when it was suddenly cold enough for me to need my winter coat (coincidentally for a theatre performance in Tokyo), and there, in the typical rubbish of the pockets, I curiously happened to find one of those ripped out vintage scent-strips,  one I had ripped out naughtily one night from a pile of old magazines at some retro cafe in Kamakura.

It is a Neiman Marcus ad. 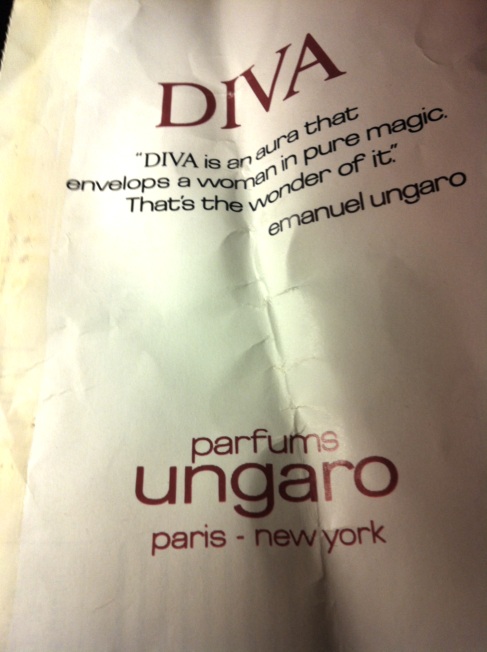 The full-blooded, aptly patchoulied and oakmossed, animal rose: the spice; the brocaded, baroque sweetness (though Diva has a significant note of honey and vanilla not as noticeable in Coco, plus an intriguing top note of cardamom). But where the Chanel builds on Diva’s theme, with glintier, prettier mimosas, fruits and more spice ( and indeed chocolate): the full Venetian gondola (Diva is more Paris, or Milan), Ungaro’s swan song is smoother, less harlequinesque: more brooding, definitely more tender and moody: more fourrure than just fun-loving. Gorgeous, yes, but less forgiving. More contained. An undulous, begowned, prima donna. 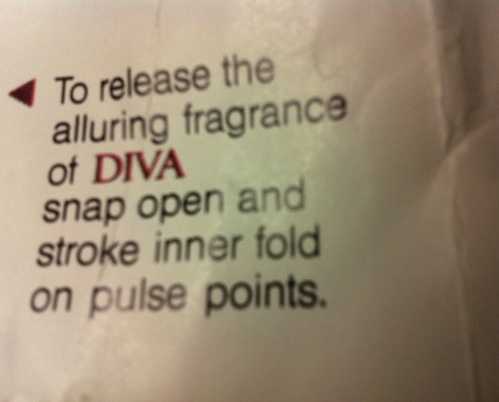