CAN ONE TRANSFER A MEMORY? ARMANI EAU POUR HOMME (1984) 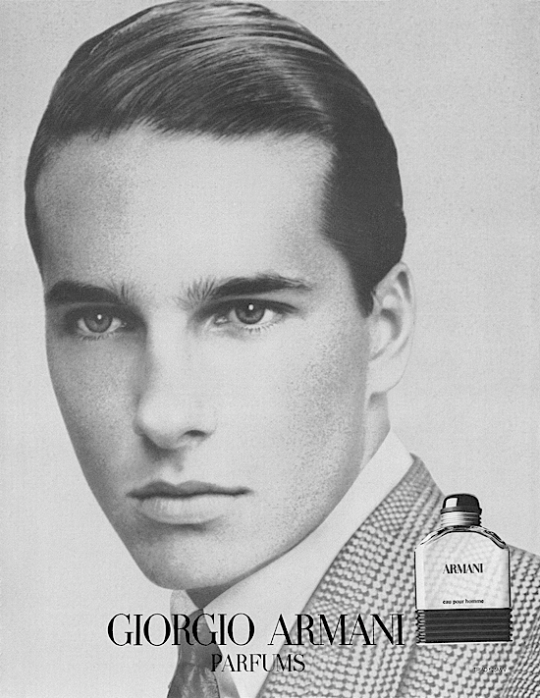 Armani Eau Pour Homme was my first perfume major perfume love. Though Xeryus by Givenchy takes the honour as the very first scent I ever saved up for and bought by myself, it was only the top notes that I loved in that grey, onyx masculine (and the fact that it got me such attention….I can still see the girls at school stopping in the corridors at fifteen and nuzzling up to my neck……what power is this thought I…...)

The taut and scintillating top accord in Xeryus of grapefruit, artemisa and cypress that had so captivated me soon warmed and wavered, however, into a soapy, and too manly, fougère that despite what the young ladies might have thought, just wasn’t entirely what the doctor ordered. I never felt entirely comfortable in its embrace despite the pleasure that certain aspects of the fragrance gave me, that sense of sharp, diffracted light glinting on granite……

My interested ignited, I kept looking and smelling, but it wasn’t until I discovered Armani, at the local chemist’s on Dovehouse Parade (the joy of expensive, out-of-shoplifter-reach perfumes being locked up in glass cases behind the counter, and the intrepid asking of the bemused assistants if you could smell them!) that I found a bottle of perfume that I fully adored, for quite a few years actually, getting bottles for birthdays and Christmas presents and purposefully building up the charisma around what I had already firmly decided would be my signature.

What drew me to Armani, beside the lovely magazine advert you see above –  so much more appealing to me than the muscular absurdity of all the Antaeuses and the Drakkars and the Azzaros –  was its stunningly beautiful opening accord of brisk, refreshing citruses, that contained, compressedly, all the zap, vivacity and optimism of a brand new day in April;  sharp, clean, lime, twisted cleverly with freshly picked mandarin and basil leaves long before Jo Malone ever had the thought, cleverly laced delicately over a gentle heart of lavender, lemon, and clove. Delightful. I remember that every time I sprayed on this scent my budding teenage self would experience a spurt of ecstacy, and it is in this experience, of first perfume love, that the seeds of my current scent-obsessed self lie. Wearing this beautifully made, ‘designer fragrance’ was so exciting to me I would race around to Helen’s house after school, or on weekend mornings, proffer up my wrists; she would be there already smelling beautiful in her Yves Saint Laurent Paris, and we would listen to Prince with the windows open wide onto her garden; lounge about; talk pompously, and dream.

Yes, Armani was most definitely my signature for quite a while, but there has always been a tendency for people to commandeer another person’s scent when they like how it smells (and why not? It is a very sincere form of flattery), and true enough, soon, my friend Owen, who lived on the same block, decided that he, too, wanted to wear Armani. Begrudgingly, I had to let him do it. And then,  to my great horror, I soon realized that it smelled so much better on him, so much smoother and angelic (the perfumer, Roger Pellegrino, also created the incomparable Anaïs Anaïs to give you an idea of its pedigree), and suddenly I felt that I just couldn’t justify wearing it any more. I have very base-heavy skin that always brings out the oakmoss and sandalwood in the final stages of perfumes while eating up and spitting out the top notes, and it was this stage that I had always been far less keen on in Armani (though I think I had never entirely admitted that to myself). It was certainly the reason, however, that I had to keep respritzing the scent to keep that lime and mandarin fresh until l discovered, eventually, the baume après rasage, which, with its creamier, more balsamic aspects, kept the snowy lemons and petitgrain, but did away with all the vieux beau base notes, wrapping up all the dapper citruses in the white draping sheets they use to cover museum statues, pointing me in the process towards the more vanillic orientals I was later to fully claim as my own.

On Owen Armani smelled perfect, and the smell of it became inextricable from him and his clean white shirts for years and years, my own self-associations quickly fading as I latched onto other perfumes that seemed to enliven my essence much more than that one had. By chance, we actually got back in touch again a couple of years ago after a long absence of contact, and funnily enough, he asked me if there were any scents that came anywhere close to capturing the atmosphere of Armani, which he still retained a lot of affection for. To his great satisfaction, I pointed him immediately in the direction of Armani Privé’s more expensive, but very similar Oranger d’Alhambra, which is clearly based on the original Armani but with even more delicious and more expensive smelling top notes (the beginning of that scent is to die for if you are a citrus enthusiast). It is a better fragrance in some ways I would say, Eau Pour Homme’s natural evolutionary progression. Nevertheless, I still retain great affection for the original Armani –  as you will always do for any first love – and when I found a full, boxed, vintage 100ml bottle recently at a Japanese thrift store, I naturally couldn’t help buying it.

It smells exactly as I remember it: crisp, fresh, the smell of a beautifully pure and elegant young man, and I simply can’t pull it off. It smells muddy and muddled on my 43 year old skin, the citruses quickly subsumed by that classic oakmoss that I never really liked, and so it has just been sitting in its box until I wondered, the other day on a whim, if it might not suit Duncan. The narcissistic implications of this aside, he does usually carry off the cologne type of fragrance very nicely, and though he initially brushed off the suggestion with a ‘Oh no, that one’s boring, isn’t it?’, once seduced by the lime (he loves lime) he sprayed and sprayed away and smelled really quite gorgeous in it. All day in Yokohama on Monday, a beautiful, unseasonably warm spring day (balmy and 19ºC; the next day it went down to minus 2 and snowed), the trail of scent he was drifting sophisticatedly and non-intrusively behind him was most pleasing. It did remind me of Owen, a bit, but was different; warmer, more aromatic, more whole.  Owen made that scent almost too morally blameless somehow, a celestial, lemonic ‘odour of sanctity’ that while quite enviable, was also, naturally, part of its charm on him. Still, that intense ‘aroma of integrity’ did occasionally get on my wick, even when I fully admit that he wore it better. On me there was always some kind of dissonance. Finally, with Duncan, though, if I can persuade him to make it a staple, with its ideal balancing of citrus and lightly spiced vetiver and oakmoss, its perfect encapsulation of a certain kind of unaggressive masculinity, I think that my first love, Armani Eau Pour Homme, may have found a new home.

I was wondering also if you have had similar experiences. I am interested in your own stories of ‘fragrance plagiarism’; of someone, a sibling, your best friend, ‘stealing’ your scent (as my brother and father did with Kouros, though I know for a FACT that I wear that one better…..grrrr);  or else realizing, to your great dismay, as I did, that another person simply wore a perfume so much better that you just had to throw in the towel and give it up.

Also, do you think that once associations around a person have formed with a scent that it is possible for them to be transferred completely to another, or will there always be some deeper, subconscious confusion? Is it selfish and narcissistic to clasp these bottles so closely, so jealously, to our chests?