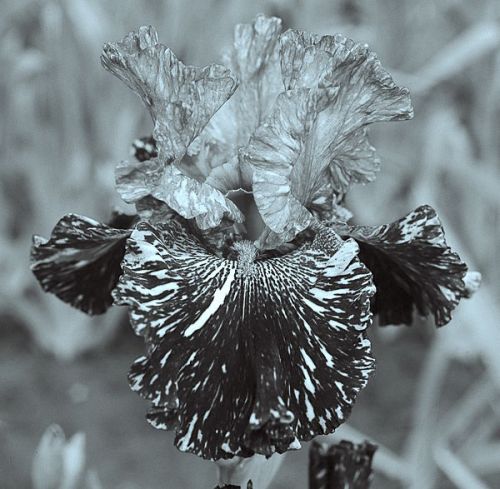 The very first few seconds of this strange and curious perfume from the house of Apotheker Tepe remind me of Guerlain’s fragile but stoic masterpiece from 1906, Après L’Ondée.

True Iris, or orris, as I have written before, stops time. I am lost for a few suspended moments within the cool, white haze of its clay; its powdered, floury shimmer. Dry as dust; iridescent. A loneliness. Iris can be actively depressing – see Le Labo’s Iris 39 – but it is raining outside as I sample this perfume; big, warm late-May droplets onto the dark green hydrangea leaves, camellia, and ivy of the front garden beyond my window, and an iris scent (the imperial flowers, set to come into flower in a meadow specially for them quite soon at the back of Meigetsuin temple just down the hill in the valley) can only accentuate the beautiful, and removed, sense of isolation. At this precise moment, as I write this, it is a feeling I enjoy.

The allusions to the classic Guerlain here are very brief. Where Après L’Ondée is virtuosic in concealing the complexity of its cold, seamless poetry, The Peradam (‘that which you have been seeking’) is a modern, stripped down niche perfume, a very pared and contoured composition formed principally of three, natural ingredients that vy and court with each other until the final skin scent is expressed : iris, sandalwood, and jasmine absolute. I smell none of the lily that is mentioned in the other reviews that I have read, an addition that would have made the composition more expansive, but this is still a quietly intense, but also very private perfume that although not quite my thing personally, could be, for the right wearer, a treasured elixir.

I often find with iris perfumes that although I can be seduced, in a chaste and unsexual manner, by the crêpe grey blue mists of the opening notes, it is almost as if I become extra sensitive to what comes next; that I can’t bear for that suspended, gossamer fantasm to be ruined. This does not mean either that I want a completely untempered iris soliflore – I found L’Artisan Parfumeur’s Iris Pallida to be far too stark and depressing; and though also serotonin-challenged, I do enjoy and wear Hermès Iris on occasion for its aerian clarity and freshness, even if it does not quite have the powderiness that I ultimately want to find in this type of perfume (Après L’Ondée is perfection in terms of art, technique and inspiration, but quite absurd on me both in terms of skin chemistry and personality – far too abstruse and dignified, feminine).

But I don’t really like my iris sweet (Iris Ganache), and I don’t like it too woody either (Aedes De Venustas’ Iris Nazarena has an opening salvo of perhaps the most beautiful iris extract I have ever smelled – I was hypnotized for a few moments in Shinjuku Isetan a couple of years ago when I smelled it, but then it later begins to go down the familiar stripped down synthetic woods of modern life that for me would have rendered it unwearable.) Iris Palladium by Les Eaux Primordiales takes a more centred, savoury approach, but for that style I already have my Tubéreuse Capricieuse by Histoires de Parfums (see post below) which takes a truly gorgeous iris and manages to combine it with cacao, tuberose, saffron and yet never becomes too voluptuous or sweet.

There is definitely a place, in my book, for more androgynous, boisé irises. Not every ‘powdery iris’ needs to end up as charmingly self-confident as the almost camply feminine perfume Chanel Misia or Editions de Parfums Iris Poudre. Armani Privé’s quietly intoxicating – if somehow incomplete for me – La Femme Bleue, for example, contains a beautiful iris note combined with a cedar wood, sawdust-like balsamic aroma that leaves a quite compelling sillage in its wake and almost makes you dream, while always keeping you (quite deliberately, I think) continually at arm’s length. The Peradam, to me, reads as still more private, personal and contained. Though the essences contrasted in the perfume with the excellent iris note – an indolic jasmine grandiflorum that reminds me of the potted pastes you can get in Indian markets, more tinctured and putty-like than the newly opened flowers; and a dose of true Mysore sandalwood sourced from sustainable trees that grounds and anchors the perfume and ultimately become its signature – might from these descriptions sound risqué or even flamboyant, in fact, to my nose, they are surprisingly muted, if still tenacious (and more carnal as hours pass), as if filtered through the bottom of thick glass, or seen looking down from the surface waters of a clear pool to the deeper, murkier sediment of the base.

Ultimately, I prefer my perfumes more generous in spirit. The Peradam, I think, will appeal particularly to the more unexpressed, even passive aggressive individual, one who appears tranquil on the surface to the untrained eye, but who to the perceptive will be transparently burning from within and probably needs such a perfume to help him or her express what they find, in the majority of their daily lives, to be inexpressible. In a world of dressed up trash, though, where perfumery is often nothing but an unthinking, vulgarising lacquer, at least this perfume is psychological. You could, in certain moments, even describe it as passionate, obsessive.