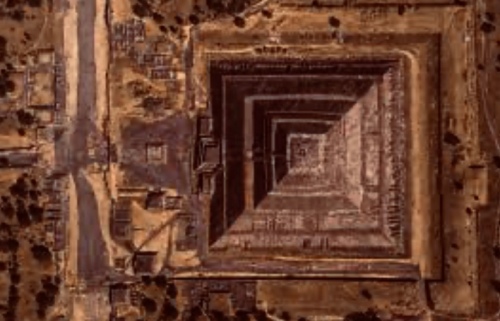 There were two incidents at the Piramide Del Sol.

The first happened when I had a severe attack of vertigo attempting to climb one of the lesser lunar pyramids.

The second was more painful. I had stupidly crawled into the grass in order to get the best photographic angles of Teotihuacan, Mexico’s largest pyramid, in awe of the Aztec majesty  in the blazing hot afternoon sun.

Suddenly I felt hot shooting pains in my legs, an immediate, infernal itching on my thighs and calves. Without hesitating,  and in full view of other tourists I tore down my jeans to find my legs crawling with red fire ants. Batting myself hysterically not realizing how ridiculous I must have looked – man in cowboy hat in his underwear, arms flailing wildly and screeching, once I had prized off the incendiary critters from my leg hair I shook down my jeans with vigor in order to restore some dignity to myself before running, clothed,  up to a random Japanese tour group that was standing near by. Skin throbbing and smarting as I shielded my eyes from the sky, I asked the unperturbed lady in charge if she knew what was going to happen to me next.

– said the woman, seeming to almost slightly enjoy the conveyance of this  news that it was going to all be very ‘tough’ ; that I was going to have a terrible fever and be bedridden for days…,.

Making our way towards agitatedly towards the exits (“It’ll probably be okay”) said Duncan semi-reassuringly, imagining me writhing and sweatridden like a dirt covered extra in Apocalypse Now, burning up and hallucinating and generally ruining our holiday by perishing in the middle of it before we even got to our friend’s nuptials in Guadalajara, we encountered a laconic, muscular female Mexican security guard in mirrored sunglasses patrolling the perimeter as bored as death and cool as a watermelon. I decided to go  up to her for a second opinion in my rudimentary Spanish learned from Almodovar movies – although unfortunately I had never encountered the word ‘ant’ ; She peered down slowly at my pathetic self through her shades, gun in silver holster, as I jabbered on excitedly about poison and delirium and weddings – but was far more sympathetic and calming than the tour guide had been ::…….just go and lie down and drink lots of water, you will be alright, they are not so bad (I also happened – gracias a los dios – to have had a very effective Aesop lemon hand cream with me in my jeans pocket that I applied to the bitten areas liberally as soon as I had whipped off my Wranglers :  I swear it worked brilliantly as an antidote). The Officer seemed to know what she was talking about, in any case,  so I decided to take her word for it, calming down a couple of notches and deciding instead to just drink daytime beers to either forget about the whole thing, or else hasten my death as the insectoid venom coursed through my veins with the bubbles in the big windowed cafe near the entrance, dulling and sharpening  our senses beautifully with ice cold Coronas and staring out quietly at ancient magnificence. The bites were very itchy, and I felt a bit odd  (though that could have been incipient sunstroke) but other than that I was fine.

I don’t quite know what led me to start thinking about this ridiculously typical anecdote yesterday evening, but sprawled out blissfully in front of my projector watching Takashi Miike’s ‘Desd Or Alive’ I was unconsciously plunged into memories of hot fire and inflammation on spraying Abel’s perfume Red Santal onto the back of my hand: a flinty aridity of fleshless spice and desert sands that took me a few moments to recognize, until my memory found the link I was looking for : D’Humeur Massacrante – a long disappeared perfume I used to love  by L’Artisan Parfumeur. A dryness of furious nutmeg and paprika alongside sulphur like the flash of a match catching light, this was one of my favourites in the legendary ‘Mood Swings’ box from 1994 that Duncan would wear a quarter of a century ago as part of his sly artillery alongside other dry and spiced elegantly masculine perfumes such as Cacharel Pour L’Homme and Comme Des Garçons’ Incense Series Jalsaimer.

Red Santal, an all natural perfume from Amsterdam based house Abel, fits neatly into this category of sparse woody hotness, with a bone-dry moisture-sucked base of two kinds of sandalwood plus a hot tempered intro of cloves and black and pink pepper over ginger and thyme. I rather like it : longevity on the skin is not as powerful as a synthetic hybrid might be but there is a lucidity to the natural essences that works. Rather than the usual, lugubrious butter of the more typical, creamy sandalwoods, this is a brisk and energizing flame of controlled heat, moderately livid. : and inflamed.