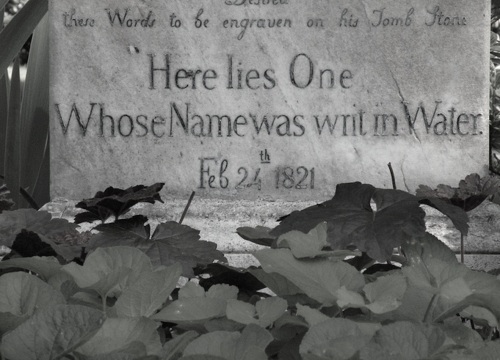 I was twenty one and had been living in Rome for a month, looking in vain for a job, and staying in the cheapest hotel I could find – a garish, pink-painted pensione near the infamous Stazione Termine. One muggy afternoon, hot, bored, and mildy depressed – but too lazy to look for work – I decided just to hop on a train and see where it took me. I was idling on the Linea B, looking at the stations to come, when I saw ‘Piramide.’

I got off. As I turned the corner from the station, there it was: a two thousand year old pyramid – the last thing that St Paul is supposed to have seen before he was crucified. It was embedded in the tall, thick-stoned walls of a sealed off garden, which seemed closed to visitors but on closer inspection turned out to be the Protestant cemetery of Testaccio: grave, still  and somnolent in the cool shade of trees. 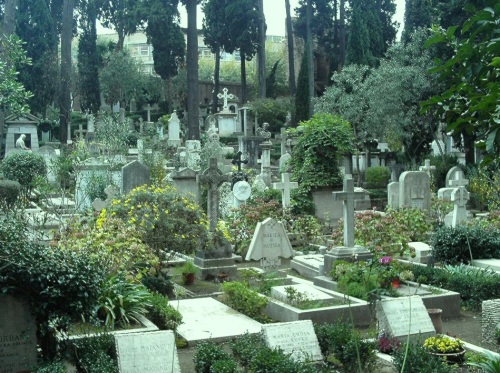 I eventually found the entrance.

You rang a bell, and an old attendant, taking his time to get to the door, let you in. A place of serenity – lush and dark, where cats basked on the stones in the afternoon light. A place where your soul could stop and breathe.

Walking down a path, I suddenly saw before me a sign: ‘Here lies Shelley’s heart.’ Then, to the left, another that said, to my astonishment, ‘This way to Keats….’

My own heart beating, I wandered in the direction of John Keats’ tombstone, and as I stood before it in amazement (I had no idea he was buried there and had not long before been doing his poetry at school, which I had adored), somehow the clouds had cleared and rays of watery autumn light filtered down through the leaves, illuminating his grave. Alone in this far off corner; smothered in violets.

I cried. The violets were not quite yet in bloom but the leaves were flourishing, there, in a dark, oily green that I imagined were imbued with (but soothed), the bitterness that Keats is said to have felt before his death. It was as if they were protecting him.

Caron Violette Précieuse is like those leaves. It is tender and poetic, with a central note of strange, bitter violet leaf. The flowers are there (and iris, muguet, vetiver), but quiet;  as if cowering in woodland rain.