Should a woman want to smell like a ‘idealised’ flower…………..?

The choice is yours.

I am not sure how such a heavenly creature actually works on a real life girl, but this dreamy, artful, fresh-green bouquet (bamboo, fig, white waterlily, lotus flowers, water jasmine, and white rose) is, in my view, almost heartbreakingly lovely.

Il Profumo describes it as having a ‘lacustrine tranquillity’, and it does have such a calming, transparent, lake-like, lily-pad beauty that I am completely compelled to agree.

Antonia was a florist in The Hamptons, and knowing her flowers, and adoring freesias, and being dissatisfied with the floral scents available on the market, she set out to create her own bouquet. In the process, she produced three American classics: Antonia’s Flowers, Floret, and Tiempe Passate, all of which have apparently been among the best selling fragrances for decades now since their launches at Bergdorf’s and Barney’s New York.

Despite my own personal love of the more fleurs à la Parisienne, there is no reason why the classic French model (flowers, woods, musks and animalics) should  predominate in a person’s floral wardrobe in the modern world; not everyone wants that suggestive, ‘come-thither’ quality in a perfume – sometimes (myself included) you actually just want a scent that goes on fresh and clean and stays that way. And what distinguishes the Antonia’s Flowers perfumes from the mass-market chemical-sheen ‘flowers’ like Romance and Happy is a natural, well crafted, ‘made-with-love’ quality that, in the case of this, her eponymous fragrance, shines all the way through the brilliant fusion of light-shimmering, china-dry rosewood and the crisp, springtime flowers (mainly freesia, magnolia and lily).

Antonia’s Flowers s a highly unusual fragrance – the intense but beautifully natural bois-de-rose note is too much for some – but one I rather do enjoy personally and one I would recommend to anybody who loves flowers and just flowers.

Or, alternately, you could try Floret: a very tightly controlled, crystal-clear, sweet-pea floral, with  rose, tuberose and marigold, and a delicious, and transparent, apricot top note. Pure, feminine, for me, this is springtime in a bottle: the olfactory equivalent of pressed, clean clothes in an open airy room.

‘A flower with no fragrance.’

Kenzo, who I have always liked (for their Kenzo Homme, L’Eléphant, Le Tigre, Summer, Kashâya and their sensuous, eponymous original scent) suddenly became a major contender in the perfume world when, eighteen years ago, in a marketing act of brilliance, they released a rather stunningly designed bottle, which appeared to contain unfurling poppies at various stages of growth, and cleverly filled airports and department stores with them. The effect was startling, the concept (‘creating the scent of the poppy’) an instant hit with consumers……….and thus cities were suddenly filled with the immediately familiar scent of young office girls going to work in Flower.

Flower is an undeniably  ‘pleasant’ scent, like anything made my Kenzo ; airy and green, with soothing, gentle notes of Bulgarian rose, hawthorn, cassie and parma violets over a sheer, powdery almond base: gentle, carefree, light, and safe – like running through a neighbouring field in freshly tumble-dried, clean smelling clothes.

Which is another way of saying that it is fragrant, and nice, but rather dull. I quite like it, but don’t get my friend Helen started on how much, and why, she despises this to the deep extent that she does.

Knowing what the women wanted – something fresh, light, sophisticated but somehow ‘vulnerable’ – Calice Becker, one of the world’s undisputed masters of florals, created a scent for Dior in 1999 that  went down a storm – J’Adore is now one of the world’s best selling scents. Despite the usual fresh floral metallica, this perfume does have that ‘classic’ stamp on it; the greenness of the fresh ivy top notes; the gleaming flowers (orchids, champaca, white roses, violets – apparently it was designed as an ‘emotional floral’); the fruitiness (Damascus plum and blackberry musk), the gentle, skin-tone, base notes. This scent is ‘pure woman’, and something you ‘can’t go wrong with’. For evenings out. For romantic dinners. For engagement parties and anniversaries: the magazine adverts featuring Charlize Theron saying it all – in gold; glamorous, pretty, charming and ‘dazzling’.

Despite my objective appreciation of its charms, however, I myself don’t  like J’Adore at all (in fact I detest it): as the murdered woman in Goldfinger was to find, all that gold can be suffocating.  The perfection; the flawlessness, is all too much for me I’m afraid, and it catches in my throat; hysterical – a sharp, processed, oesophagus-gilding lacquer.

The same with Romance, so shrill and sharp it hurts me. True-blue thoroughbred, how could that patrician of all patricians, Ralph Lauren, go wrong with an advertising campaign that played up to every Tiffany-dreaming, happy-ending, Caucasian fantasy? And the smell! So clear, so sheer, so ‘romantically’ floral and clean: so ‘right-for-every-occasion’.

IT was Inevitable then, that Romance should have been the great commercial hit that it was. So shrill; synthetic; conservative but probably just the right perfume if what you are looking for is a clear, mindless,  inoffensive, and utterly indistinct scent for that wedding reception, PTA meeting, or baby shower.

Pleasures was, I think, aimed at the same target audience as Romance; thirty-something mothers of a stable income and societal position who shun any hint of prurience (or even any acknowledgement they have a body) in their scent  – because what would the other mothers think?!?. ….For the successful original advertising campaign, that foxy British minx of the upper-middle classes, Liz Hurley, donned a lilac cashmere sweater, and, airbrushedly, tumbled about with a Lenor-washed puppy in a field, a thousand million miles from the cleavage Versace It-dress that made her famous. The message was clear: like Romance, this woman was a Good Girl, and her family values were most definitely Virginally Intact.

The difference between Romance and Pleasures, for me though, personally,  is that Pleasures has character, and lots of it – only characterful creations are this recognizable. So powerfully, translucently floral it hurts, this complex bouquet of rain-drenched flowers (lily, lilac,  violet leaves, peonies, baie-rose…) can be hypnotically feminine, mysterious even, on the right person if used in small doses (I have known women who have smelled quite gorgeous in it) but, ultimately, it is still so resolutely ‘pure’, so WASP, I have to say that in some ways it rather scares me. For green freshness, I definitely preferred the more self-possessed, bitchy, and heel-clicking Gucci Envy.

Middle England: a secret, illicit tryst between two married people, in love,  speaking in quiet voices under their drinks in the town’s only hotel bar.

He leans in closer, she coyly clasps his hands, and, furtively watching and smelling from a distance, we don’t doubt for a moment the passion that will later probably ensue…. 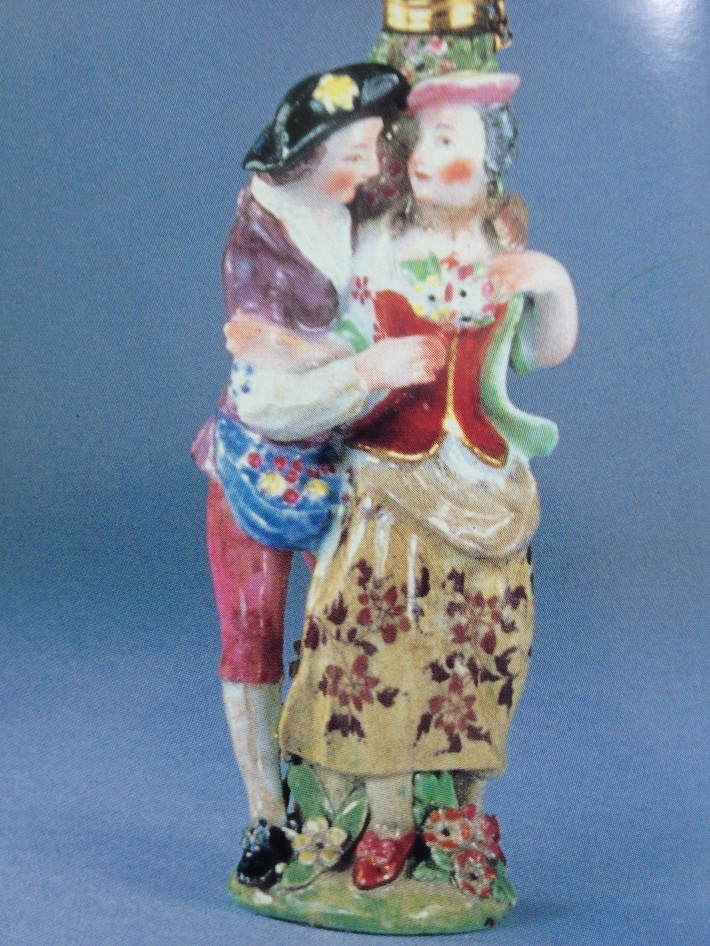