This week I find myself deeply drawn to Paco Rabanne’s Métal.

It is spring outside.  Bright, something between warm and cold, and the flowers are blossoming slowly: tulips pushing through, peach blossoms already blown away by the wind.

With the sunlight, the new air, and all the freshness I feel in the atmosphere, as well as the freedom of being off work for almost three weeks (sheer heaven), I want optimism: zest, but with emotional, and aesthetic,  intelligence.

Métal, a sly, forever fresh, delicious concoction, fits the bill perfectly, a scent that is not often written about for some reason, but one that I find very beautiful, and strangely not dated considering the fact that it is already 34 years old.

No: Métal is ageless. A shimmering, (dirty) angel of the disco set who constantly has one eye on the next: a laughing, exuberant, parfum savonneux: always soaped down and lightly fresh from the shower, washing away the sins from the night before with dismissive,deft swishes of the hand;a foaming, aldehydic sparkle of fresh greens; ylang ylang, white iris, rosewood and peach, all gently laminated with the classic, subtlely metallic sheen of rose à la Calandre, Paco Rabanne’s other, rather more philosophical and held back masterpiece from 1969.

Upon contact with the skin, this lugubrious scent bursts with life: quills forth from the bottle clean and energized, elegant, green and sweet, the protectant veil of aldehydes preserving the joyous flowers and fruit within in a bubble of about-to-step-out-the-house ecstacy that never fades; a white pant-suit (white, white, most definitely white – the white of Bianca Jagger and her Studio 54 stallioned entrance, the white of the Scarface mansion:  that seventies, flared Travolta white; the white of the lights; cocaine, and the mindless, careless, flamboyant last days of disco……)

Under the glorious sheen of this scent is that effervescent, pampered smell of expensive designer bubble baths that was taken up again later in the eighties in such scents as Courrèges In Blue (1983) and Byblos (1989). Beneath all that luminosity, if you look at her closely, Métal is smiling, of course; but wide-eyed, with gleaming shark-white teeth. Though she never betrays it, there is something depraved beneath this epidermis, and herein lies the real beauty of the perfume: unlike other disco era perfumes of the period – Ivoire, Scherrer, Rive Gauche, Michelle – which all have some internal self-awareness of their in-built shelf lives, an inner knowledge of their decadence, Métal conceals this side of herself to mad perfection – even to herself :: we see just a glimpse of it, occasionally, under her future-seeing façade, in her eyes: and, as with other such perfumes such as Chanel’s Cristalle, to which this perfume bears a slight resemblance (though fruitier, younger, less haughty), this is, to me,  what seals the scent in forever-fresh immortality.

Unlike the ‘clean’ fragrances of current climes though, which are so chemically preened you immediately smell a rat, Métal is evincibly human ( if perfectly put together: it is very difficult to pick out individual notes – all so sheened and shined together effortlessly in a manner very much of the time); a scent that must have smelled stunningly beautiful emanating from the shoulders of the disco creatures of that era;  or the valiumed wives moving about their bay area lidos and mansions, as sunlight spliced their vodka martinis and their long, floating sleeves trailed the secretive jungles of their houseplants.

As they, like Nina Van Pallant in Robert Altman’s  The Long Goodbye, concealed the potential numbness within the cold veneer of the current, of the fashionable, the momentary; the flesh that would decay; but which, at this moment in time, laminated in Métal, felt preserved.

To me, there is definitely something of all this in this scent, like the liana females who also inhabit Harry’s House, one of my favourite songs by Joni Mitchell…

Caught up at the light of the fishnet windows

Looking for the chic and the fancy

He opens up his suitcase

In the continental suite

And people twenty stories down

Colored current in the street

A helicopter lands on the Pan Am roof

And businessmen in button-downs

While at home their paper wives

Paper the walls to keep their gut reactions hid

Yellow checkers for the kitchen

Climbing ivy for the bath

She is lost in House and Gardens

He’s caught up in Chief Of Staff

He drifts off into the memory

Of the way she looked in school

With her body oiled and shining

At the public swimming pool….

Yes: these slender, maquillaged, loose-limbed, pant-suited women who, in the movies at least, exist to rest on the arms of the rich men who own them…

And the white Art Deco mansions, in Florida.

I have referenced De Palma’s perennially popular classic Scarface before in relation to Léonard’s lovely, if simple, Tamango (1977), which always reminds me of the character Elvira and her gauche, ‘bored’ moves on the dancefloor early on in the film as Tony is listing to possess her, materialistically, as his trophy wife. Métal, which is far more complex, expensive smelling, and downright gorgeous in many ways, might, in some ways, be the same character a couple of years later, when, married to Pacino, we see her, still beautiful, but pining away in their gilded mansion, their giant, ivory jacuzzi filled with foam, champagne bottles and excess.

This perfume might almost be what holds her together: it never loses its ever-recurring sparkle, its  foaming, delirious lustre.

For this review I have been discussing two bottles of vintage Eau De Metal, and also the parfum (pictured), a bit ropey and old now, but still lovely. There is not a great deal of difference between the two perfumes; one is just lighter and fresher, the other more long-lasting, as you might expect. Ultimately, though, I think I like Eau De Metal best and would recommend it to anyone who goes for this deeply appealing, timeless, feminine sheen,  still easily found at discounters online. Get vintage if you can. 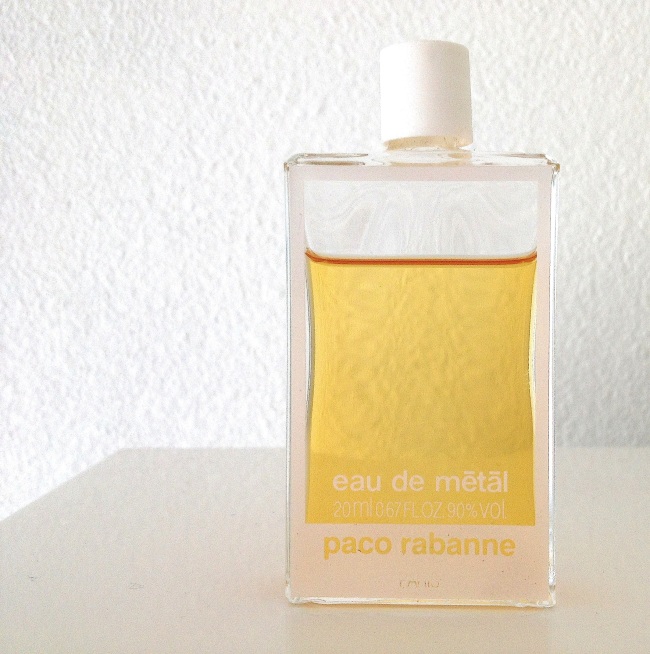