“We know, without being told, that this woman smells of delicious perfume….”

I NEED TO SEE THIS FILM. 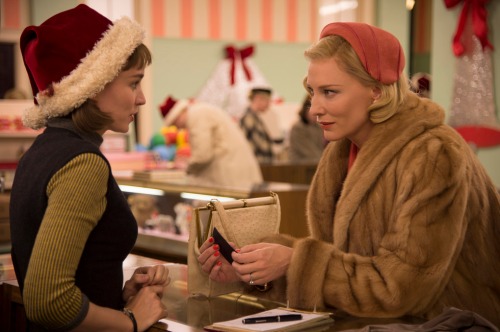 In an afterword to her 1952 novel “The Price of Salt” (published under the pseudonym Claire Morgan), novelist Patricia Highsmith recalled an incident that took place when she was working in a Manhattan department store during the 1948 Christmas season. A “blondish woman” in a fur coat, “slapping a pair of gloves absently into one hand,” approached to buy a child’s gift. On the surface, it was an unexceptional encounter — the woman chose a doll, paid and departed — but Highsmith writes that she “felt odd and swimmy in the head, near to fainting, yet at the same time uplifted, as if I had seen a vision.”

In real life, the two never met again. But the moment inspired a novel in which the women fall in love, and has now become the gently dazzling movie “Carol.” That word “swimmy” describes it precisely; together, director Todd Haynes, screenwriter Phyllis Nagy, actors Cate Blanchett and Rooney Mara, cinematographer Edward Lachman and composer Carter Burwell immerse us — nearly drowning us, happily — in beauty and longing. You leave the film’s soft-grained world reluctantly, as if taking off a warm coat when it’s still a little chilly inside.

Haynes, whose nostalgic 1950s melodrama “Far from Heaven” is something of a companion piece to this film, softens Highsmith’s sometimes hard-edge world — this, remember, is the novelist best known for creating the murderous psychopath Tom Ripley. Mara plays Therese, a quiet, thoughtful young woman not yet sure what she’ll do with her life; Blanchett is the poised, precise title character — we know, without being told, that this woman smells of delicious perfume. (How does Blanchett convey that? It’s something in the posture, perhaps.) The store encounter becomes a meal, which becomes a visit to Carol’s elegant manse (where she lives with her husband and young daughter), which leads to a road trip. Along the way, they fall deeply in love: Therese instantly, like a soft thunderbolt; Carol more deliberately, but just as passionately.

‘Carol,’ with Cate Blanchett, Rooney Mara, Kyle Chandler, Jake Lacy, Sarah Paulson. Directed by Todd Haynes, from a screenplay by Phyllis Nagy, based on the novel “The Price of Salt” by Patricia Highsmith. 118 minutes. Rated R for a scene of sexuality/nudity and brief language. Guild 45th, Lincoln Square, SIFF Uptown.

This being the 1950s, a lesbian affair brings its own peril; we know things can’t go smoothly for Therese and Carol — and they don’t. (Highsmith, though, allowed her literary doppelgänger some hope, which shines through here.) But the film is less about telling a story than creating a mood; letting us wallow in the way Blanchett’s voice, low and carefully placed, makes you think of pearls dropping onto a carpet; or how Mara’s face seems to open up and her breathing changes when Carol is nearby; or how the whole movie, with its burnished colors and city lights, looks like a Hopper painting come to life. “Carol” is, to quote Highsmith’s words written so long ago, a vision.

13 responses to ““We know, without being told, that this woman smells of delicious perfume….””