Donald Trump is interesting in that he provokes two extreme reactions in me. On the one hand, I could write reams and reams and reams about what he represents, on analysing his self-centred, bigoted, and very dangerous impact on the world. Simultaneously, at times, he quite simply renders me speechless.

( note: re-reading this now, over two years later, I realize that what I wrote here, syntactically this doesn’t actually make sense. Had he already obliterated my brain by this point? What was the second thing that I was referring to? His UNBELIEVABLE self belief ? ( which still completely ASTOUNDS me, and which I am strangely in awe of, as it is precisely this self-powering Ego thst has allowed him to just smash his way around the world the way he so gobsmackingly has, fucking everything up like a satanic baby….

– didn’t you love the protest ballon in London though?!!! )

Today, tired from work and from reading about him all morning in the weekend newspapers, I am veering more towards the latter.

I have never smelled any of the fragrances released by the house of Donald Trump, nor do I intend to, so I will let other people talk about them instead.

“Success” is one of The Haus Of Trump’s more recent releases, ” Trump “his eponymous and original signature perfume – though that last word, perfume, is not one that the misogynist and homophobic, illiterate fools that support him would be very likely to use themselves ( no, this is a Trump ‘cologne’).

No, there are no Donald Trump scents in my own perfume collection, nor will there ever be. But it is quite fascinating to read the quite brilliantly evocative reviews of ‘Donald Trump, The Fragrance’ from the Amazon website, if you care to read through a selection from them that I have cut and pasted below:  a curious, and quite toxic mix of gungho macho bullshit and scabrous, seething sarcasm (and it’s sometimes hard to distinguish between.)

All of which, in any case, just shows what a deep fascination this narcissistic monster has for the American public, the world at large, and for people like myself who, in some kind of can’t-look-away-from-the-impending-disaster-that-is-about-to-occur type of syndrome, just can’t get enough. A kind of cynical and masochistic despair at the deep  idiocy of the world, alongside an undeniable appreciation of the buffoonery and the camp, as well as his obviously twisted brilliance – this man is very, very canny and he knows just how to plunge deepest into the cruellest prejudices and shabbiest instincts of the ‘disenchfranchised’, who he openly mocks, but who are just too blind in their own crude simplicities to see through what are obviously lies, jingoism  and blind, unadulterated ambition. This alone, the fact that so many of us are just totally mesmerized,  makes me wonder whether in actual fact, despite all our (too late ) mockery, this man just MIGHT get enough votes to win the next presidential election. 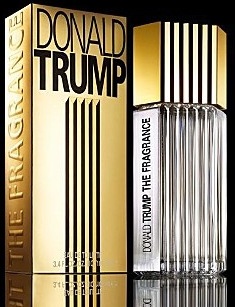 Bullish. That’s the one word that best embodies both the spirit of Trump, the man, and and the fragrance of his cologne.

Indeed, a bull was the image that immediately formed in my mind the first time I smelled “Trump the Fragrance for Men.” I’ll never forget that introductory whiff. It seized hold of my entire being, unleashing a storm of olfactory memories that left me gasping from a perch on a long-forgotten “bulling stool.”

Authentic Americans, patriots like Joe the Plumber and Donald the Trump, simple men who revere the values of the Heartland, will always remember the joyful hours they spent on a bulling stool. Who could forget the wonderful sense of anticipation you feel as you sit there behind the bull, slowly massaging his glorious bull grenades while you screw up the courage to sniff the holy land–that tract of hide that resides so invitingly between the bull bag and the cave of shame–until, eventually, the wanting overcomes the fear and you thrust your nose hard up against the bull and take a whiff.

That, dear readers, is the musky barnyard smell of “Trump the Fragrance.”

But that is only part of the bulling stool experience and its relationship to the Donald. Occasionally, the bull will mistake the grenade massage for a medical examination, and he’ll turn his head and cough. When that happens, bovine physiology dictates that the bull forcefully eject the entire contents of its fourth stomach out through its cave of shame. Imagine leaning into that as you’re thrusting you nose in for a sniff. It’s a breathtaking experience, literally breathtaking. It’s also very exhilarating to take the full force of such a load of pure bull in a single sitting. It’s the only experience that is comparable to sitting through one of Mr. Trump’s speeches. They’re the same thing, really.

Since using this life changing product, I’ve experienced several bankruptcies and the dissolution of two or three marriages. Never before have I been so close to achieving a pinnacle of the American Dream. I’d give this balm five stars, but it’s annoying that I have to produce a birth certificate every time I purchase a bottle.

Whodda thunk it? A bombastic superannuated meglomaniac freak show attraction is also a fragrance maven? Nu? What next, Donald, advice for the lovelorn? Like its eponym, Eau de Trump is no flower born to blush unseen and waste its sweetness on the desert air. Place a few drops discretely behind your ear and women will “sense” your presence two floors below. Bloodhounds will find you in a chili pepper patch. Babies will sneeze when you enter a room. Teenage girls will giggle as they text their BFFs. Believe me, it happens!

My marriage had been hitting a rough patch. After 15 years I’d put on weight, all we did was idiotic sitcoms and reheated Stouffers dinners. Maybe the magic had gone out of our relationship. I thought about joining a gym, or showing my wife some consideration or maybe stop flirting with the divorced cocktail waitress with the Dolly Parton wig in the trailer next door. All those things seemed way too hard. Instead, I tried a little Eau d’ and next thing you know, I’m in the sack with the cocktail waitress, and it may be a wig, but those memory glands are for real, baby! (Marriage is way-over rated!)

So it really worked out for me, but I wish I had followed the Donald’s example and gotten a pre-nup. The wife got both halves of the double-wide, but at least, I kept the Harley and the pitbull.

Only for Right Wing Republicans

I bought some Trump the Fragrance and tried it out recently. When my wife got a whiff of me she immediately sent me outside to the deck. (Thank goodness the Wi-Fi works out here) She said I wasn’t allowed in the house until November, 2012 unless she could hose that smell off of me.

I’m holding out until the Iowa caucuses!

I find this ‘fragrance’ to be very reminiscent of a bar scene where men tell lies mostly to impress other men.

Of a man who sees women only as Arm Trophies. If I were the man who squandered his father’s fortune, had a comical combover and lied about my draft deferments, this scent would surely bespeak of all of that and more!

Motel Soap will leave a person more appealing than this, yet the latest in self-promotion of a man failed in everything.

Women who can think for themselves will be repelled. Gold diggers and bimbos will love it.

Wear at your own risk.

26 responses to “DONALD TRUMP : THE FRAGRANCE”