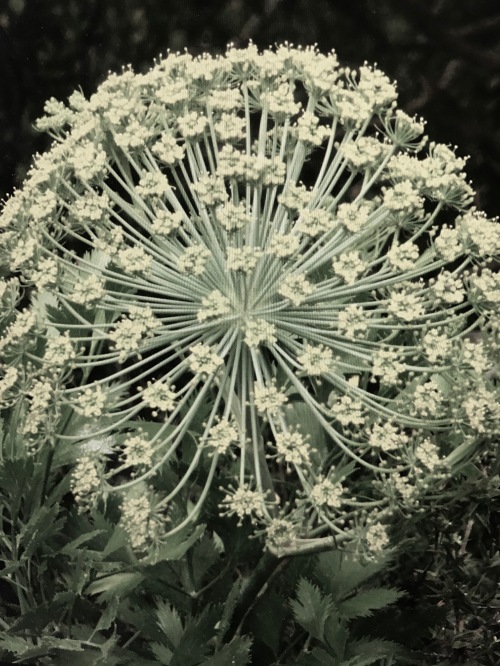 I put up an impromptu post yesterday concerning galbanum, that strident, acrid, greenest of resins that was generating some interesting comments but which, as often happens with iPhone posts written and edited on the bus, just suddenly disappeared (god knows why), much to my incandescent fury. I am not the kind of writer who can repeat words verbatim  – even if I could remember them – as it suddenly seems somehow dishonest and fake to me, so if I don’t have a draft of something that is it.

In essence though, we were discussing galbanum in scent, but also the fact that I had put some galbanum essential oil on a burst blister yesterday as I had read about its purported vulnerary  – wound healing – properties and wanted to see if this was true.

The smell of galbanum, even from just one drop of neat essence put directly on the infected area, stayed with me the entire day and all through my lessons.  With the combination of other, faintly vanillic perfumes I was wearing, I started to feel as though I were wearing Must de Cartier parfum (which posits a stringent, green galbanum note over orientalist balsams to intriguing effect ), even as my thumb vaguely throbbed and tingled and I wondered if I had done the right thing.

I have great faith in the power of aromatherapy and essential oils, however, have been using them for decades now both for physical and psychological well being, and there is no doubt that the galbanum really does heal cuts and open wounds: this morning after the band aid came off during the night and the area looked a little seepy, I applied another drop of pure Iranian essence to the area and could physically feel and watch it suturing and making skin cells from within (in an hour the affected cut has hardened and pinkened and I feel that pleasurable, corpuscled, flickering sensation you get when you can tell that your white blood cells are stemming into action). In using beautiful, natural essences in this way you get physically closer and more intimate to them because you have internalized them, physically seen them entering your bloodstream, and you can imagine how such ancient knowledge has worked over the millennia, how frankincense, myrrh and galbanum would have been anointed on suffering soldiers on battlefields, potentially saving their lives in the process.

The next time I put on my galbanum top noted perfumes, I somehow feel now that I will have been enriched by this experiment. That I will experience its strange, gummy, green, leaf-surging astrigence anew.

Tagged as the healing power of natural essences