You can get so accustomed to never smelling anything new or innovative in mainstream perfumery that when you do come across something different it can come as a shock. The use of a very fresh, green, bright and convincing Roman chamomile accord at Gucci guru Alessandro Michele’s request in the new Memoire D’Une Odeur is unusual and arresting, utilizing an unfamiliar (to most people) floral/herbaceous note as the lead in to a ‘unisex’ fragrance in an almost fragile, vintage looking bottle focused on the memories of childhood and innocence.

Chamomile is a strange and risky choice for what the brand is hoping will be a big commercial hit. I find this quite commendably bold and risky  – not that Gucci doesn’t already have enough euros in the vaults if things go haywire –  even if the smell of the flower itself has always personally given me feelings of ambivalence.  I have never liked Roman Chamomile essential oil (the variety that Alberto Morillas has based the perfume around, adding light floral notes of Indian coral jasmine, fading to transparent woody skin musks); neither do I especially like the German chamomile variety,  used in aromatherapy for its anti-inflammatory and calming properties due to the presence of the naturally blue soporific azulene.  Something about the smell, a peculiar hay/honeyed inner friction,  rubs me up the wrong way; my innards don’t sit naturally with its aromatic composition. Similarly, although for a while I tried drinking chamomile herb tea at night to help me sleep (these days I only drink rooibos or peppermint), ultimately, there is something about a lot of chamomile teas that just smell to me of warmed catheter; the dozing night ward………….and as soon as that aspect becomes apparent to you it becomes repulsive to say the least (and don’t even think about adding vanilla or honey to it, because it just makes that hot bladderbag aspect of the stewing flowers even worse…).

While it is interesting that Michele assumes that chamomile forms an important feature in all of our childhoods (Roman chamomile has been grown in household balcony pots since the 16th century in the city so perhaps the scent is better known to Italian families), in our own household growing up there were no herbal teas, no variants of Darleejing, Assam or the bergamot–infused delicacy of Earl Grey either: I was not familiar with any of them. Among my schoolfriends and family you drank PG Tips or Typhoo in a mug with some milk and maybe sugar and that was that. In fact, the first time I ever drank anything different,  tea-wise, was at university. I was in my law student friend Sarah’s room on the floor below mine and I remember that one afternoon she offered me some chamomile tea. I had never had it before and had no idea what it would taste, or smell, like (I was yet to discovery aromatherapy) but as soon as she opened the paper box and plunged the paper-sacheted infusion into a cup of hot water I had a Proustian rush of such extreme proportions that suddenly I was running along the river with my brother, my grandfather and his dog Candy, panting in the fresh early morning air, carpets of chamomile flowers crushed underfoot giving off the most beautiful green-appled leaf smell of happiness; wrapped up in hats and coats and red wellington boots through the trees; the stream flowing beside; I remembered vividly how I had picked up the flowers as we ran along like daisies where bees could nest inside yellow like a hotel; sheltered; I instinctively pressed those fragrant heads together, releasing the smell that replenished my young brain, suffusing heart and smell; trapping that memory there forever in my limbic system.

I don’t remember precisely what that make of particular herb tea was, but it was fresh, airy, green, and it captured the exact smell of the living flowers in nature rather than those sun-dried, malted, heavesome counterparts I can’t abide. Though unobtrusive and subtle –  perhaps, ultimately too tentative in its entirety, Memoire D’Une Odeur shows no hesitation in putting the greener, more living memory of chamomile flowers in the main thrust of its composition, in a pleasant, even emotive release that takes contemporary commercial fragrance to newer pastures. 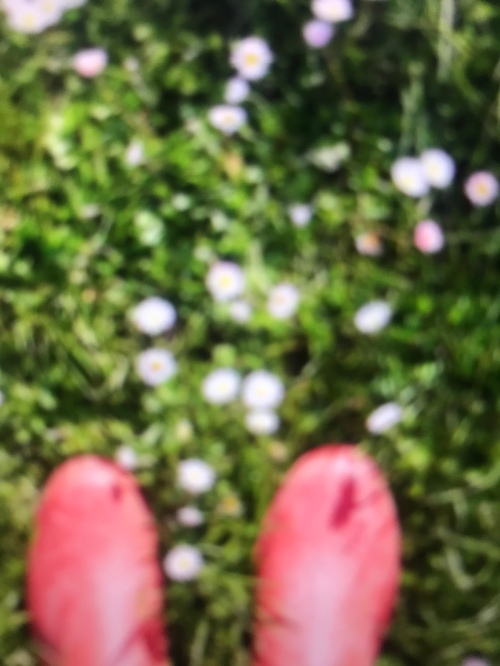