It goes without saying that it is difficult for all of us to completely think straight right now in these times of escalating infection and lockdowns. I am also wondering about what to do on here: should I just be creating a ‘space of dreams’ to escape from the increasingly terrifying realities by melding perfume with memory and sensation as I usually do, or should I instead just be writing about what is happening around me in the world from my country of residence’s bizarrely head in the sand Japanese perspective ;  or alternatively, not writing at all? Advice welcome – is it even ‘appropriate’ at this particular time to be rambling on about perfume –  I know that all of us have much more important things on our plates than to even contemplate thinking about such ‘frivolities’.

We have a morning ritual. We wake up, and D makes Earl Grey.  He brings up the Japan Times and The New York Times, which we read virtually from cover to cover through the morning as I go downstairs and make mugs of coffee, grinding the beans (which I sometimes find exhausting, so lazy am I). I have an insatiable desire to read as much as I possibly can, though, about the coronavirus, sick though we already all are with reading and hearing about it; the horror in the New York Hospitals, the epidemic in Spain, the malignant fuckwit that is ‘the president of Brazil’ calling the entire thing simply a left wing ‘fantasia’  – (can’t this dastardly virus be more selective in who it takes out?) ;  the Japanese weirdly muted response that is still entirely baffling to the mind and which is so very different to our neighbours South Korea and China who have taken swift action to deal with the pandemic (sometimes I honestly feel like I am living in a dream world. Examples: our lovely neighbours and a family we are very close to, and who I would never say a bad word about, well not usually, bumped into D as he was taking out the rubbish to the assigned place the other day – they are both around eighty years of age- and it was great, if perplexing, to hear that they apparently seemed so cheery and business as usual: ‘This is a high class place, so we are not worried. We will be ok’. Er…………..mmmmm …………..The same day, a little bit later as we were heading along on our bicycles heading for yet another rendezvous (so much for social distancing! We are failing miserably) – we saw our very overworked local doctor on the street who was making a house call looking flustered but cheerful as always and who assured us ‘ daijobu yo! Koko wa heiwa desu yo!’ “ It’s ok! It is fine! It is peaceful up here’! as though we were all nuns at the top of a cliff in the Himalayas, cut off from the rest of the world with no possible transference of any communicable diseases, when the reality is that yes, we do live at the top of a hill, in a residential area that was carved into a former zen temple mountain at the end of the 1960’s, but it is a commuter area: everyone either takes the bus down to Ofuna  (twenty minutes) where there have been confirmed cases – or walks down the hill along the scenic route past the temples to the station at Kitakamakura (fifteen minutes), home of Engakuji, world centre of Zen Buddhism, but as far as I know, still not a protector against the virus; the point being that people are coming and going all the time from Tokyo and Yokohama where they work, and then returning to the relative haven that is Imaizumidai, packed on trains and on buses back up here to their homes…….as far as I am concerned an awareness of this is just common sense (says he who was planning to go to a friend’s wedding on Sunday! ). AT ANY RATE the idea that we are somehow safe and living ‘peacefully’ ‘up here’ is pure and unadulterated nonsense. Bullshit. I feel like I am living in a surreal zone of oddness where people can say such things that are pleasantly self-deceiving to keep up the spirits – which I understand – you need need to be as cheerful as you possibly can – but at the same time, almost  – if I am honest with you –    quite i n s a n e.

As is planning to go to a wedding with a room full of dressed up guests in a Yokohama hotel when the world is in self-isolation mode and even Japan, now the Olympics have officially been postponed, is beginning to murmur about lockdowns just like everybody else (some articles have put forward the idea that this country is just quietly dealing with ‘pneumonia’ cases and then just treating them as pneumonia cases without actually doing the test to find out if it is anything else ; thus keeping the official figures, and the panic levels down  – and the economy ticking obliviously along –  – – –  = = = ). I don’t know. I don’t want to let my friends down when they are ‘braving everything’ to go ahead with the wedding as intended, and wasting so much money, but I am also starting to realise that this is more than slightly foolish. I have had severe pneumonia twice, as you know (as has the bride! just two years ago, and she had it really badly, dear god what are we all thinking), and realistically none of us should be putting ourselves in a position of physical danger all for the sake of a punkish middle fingered hedonism, which as you all know, I am also severely prone to, and have been from the moment I plugged in to my own personality as a teen ; like most other people I love life, and enjoyment, and pleasure; parties, people, perfume, food, alcohol, dancing, photography, art, music, experience – anything that isn’t the daily grind – which I am significantly less partial to  – but let’s face it, despite this appalling libertarian Sagittarianness of freedom über alles there are limits. Yes, we bought new clothes the other day, after a mutually irritable day of bickering and taunting, but so what (all resolved by a delicious Thai meal at my favourite restaurant, I must say; the second the coconut based kaffir lime sublime balance of the Tom Yum Kun soup hit our taste buds and smell receptors, warming our throats with the extraordinary  deliciousness reserved for the finest cuisine from that most sensuous of culinary cultures, everything got immediately better; the moods back on an even keel, helped along immeasurably by cold Chang beers, and the neon of the street outside; as the reality parameters became more blurred; and the imminent threat of mortal illness subsided, and we re-entered the dream state that is our default modus operandi).

But. We are not stupid, I hope. At least not completely. On the way up on the train on Tuesday to Yokohama to hunt down some clothes at our usual haunts we had our masks on together: the first time we have ever been out wearing them as a pair –    reused ones,  as we can’t buy any more  here, and so probably quite pointless; D’s pitiful number hardly even covered up his face with big gaps at the side; for comfort, I had turned my also multiply-utilised mask upside down, which made me look something like the walrus from Lewis Carroll’s Jabberwocky; even the right way up it looks ridiculous, supposedly a mask to stop your glasses from steaming up, but on me with the horns pointing towards the eyeballs it just made me look really ugly and very evil. So no properly working masks. And probably no wedding, either we are beginning to realise, as it is a little bit too reckless, even for us. I don’t want to worry our parents back home, who think we are mad as it is even at the best of times (because you know, you only live once – as far as we know – and we have always hated the mundane and that really is never going to change: : : but even so).

No. Not attending the wedding is obviously the most sensible option, even if I know I will get pangs of regret when I see all the photos published in droves on social media with a D+ N shaped hole in them and feel like something of a coward (I love all the bonhomie – the clinking of glasses; the toasts and the hors d’oeuvres  :the possibly misguided ‘rising above’ the sense of global calamity that the Japanese government has attempted to hide from us “We can overcome the coronavirus!” shouts Abe, but which we all deep down know is obviously the reality, because you feel it in the deeper recesses of your corpuscles).  You know it in the back of your mind (and at night in your dreams). We should not  be going to this wedding  (     tell me honestly: I think all exchanges of conversation and communication are good at this time between us all, no matter the subject, as a way of lightning the psychic burden on the spirit). And on that note, how are you doing personally, right this moment,  in terms of health and happiness and sanity, as you read this, in this bizarre ‘new world’  that has suddenly been turned completely  upside down?

The sun was shining on the sea,

He did his very best to make

The billows smooth and bright ………

And this was odd, because it was

The middle of the night. 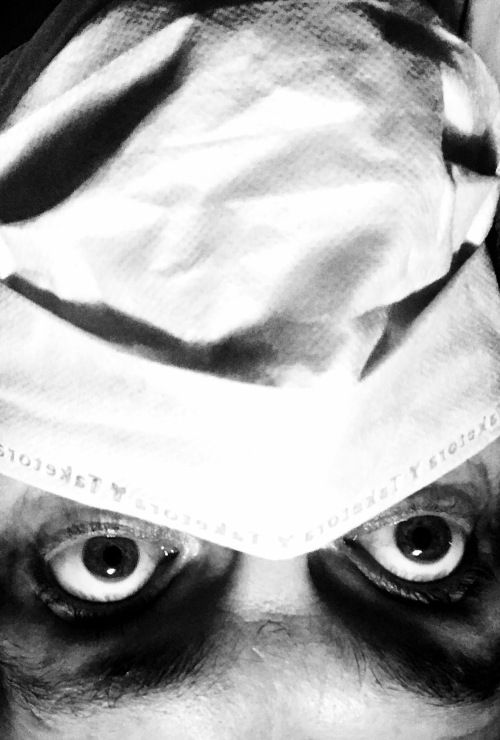